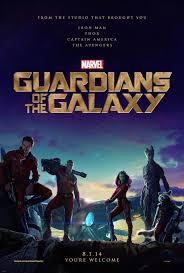 It would have been very easy for Marvel to keep making the same sorts of superhero movies, recycling the already developed heroes and introducing more recognisable or traditional options. It isn’t like there aren’t many different heroes that would have slotted nicely into the already developed universe; the likes of Doctor Strange, Ant-Man or Black Panther. Even giving Hawkeye or Black Widow their own movie would make sense, if you wanted to play things safe.

That is why many people were surprised when Marvel announced Guardians of the Galaxy as their second movie of 2014. People were shocked because the characters were relatively unknown, even amongst comic book fans, and also didn’t fit nicely into the already established universe. It was a bold risk but one that was well worth taking.

The result is also Marvel’s edgiest movie. Knowing this film wouldn’t have to fit as the others did, Marvel have gone for characters and dialogue that have a sharper, more mature edge to them. It pushes the boundaries of a 12a (the UK equivalent of a PG13) in everything from language to the violence used. It is a very refreshing change though and makes for a much more interesting set of characters.

This is the other reason Guardians of the Galaxy is such a success. It is brilliantly cast, with some great characters, who are like nothing we have seen before. These aren’t your traditionally heroic superheroes but the movie is better for that. Marvel will struggle to outdo two of their better, funnier creations since Downey Jr’s Iron Man. Rocket Racoon, voiced by Bradley Cooper, is one of the craziest, silliest, quick-witted and bad-ass characters, that we have had on our screens for a little while. He is the highlight of the movie and could carry a film on his own for sure.

Chris Pratt manages to ensure he doesn’t get over-shadowed as the “lead” though. He is a very likable leader of the Guardians and manages to carry the movie brilliantly. It demonstrates how big Pratt will be in other movie franchises, namely one with a park full of dinosaurs, that he can be the action hero, charming ladies man and goofy leading man.

The same can’t be said for the other three Guardians; Zoe Saldana’s Gamora gets the better action moments rather than decent story. The same can be said Dave Bautista’s Drax the Destroyer, who holds his own, as you’d expect from a professional wrestler, in the fighting sequences, and gets some funny moments without making a huge impact. The biggest shame is Groot, who didn’t quite feel surplus to requirements, just under-used compared to Rocket.

Part of issue is the story itself. To Marvel’s credit, they demonstrate how cool a “space-opera” Guardians could be within the first twenty minutes. Different characters, planets, factions and a decent story is developed. It made me even more excited for a fresh Star Wars movie. The issues develop afterwards, when in trying to introduce the characters, all we really get is a chase movie. It’s just shifting bickering characters from one set-piece to another.

The bickering is very funny though and the set-pieces are fantastic, particularly the sequence in the prison, but the final act is hardly anything fresh or exciting and considering the huge build, suspense and peril around the villain, played quite competently if nothing else, by Lee Pace, it ends quite abruptly and unfortunately, in quite a rushed and silly manner.

What it does demonstrate is that there is plenty of potential in Guardians of the Galaxy and a franchise that Marvel can run with without being tied directly to Avengers. It also shows that there is much more to their Marvel franchise than the traditional heroes and if the scene after the credits is anything to go by, things could get even weirder still.

Overall, Guardians of the Galaxy shows that Marvel are willing to take risks and not play safe with their ridiculously successful franchise. They introduce edgier, darker and more violent “superheroes” in a world that is not recognisable or linked to anything we have seen before. It does falter on story, offering something quite uninspired and average, but the characters and dialogue more than make up for this and demonstrate great potential for the future.