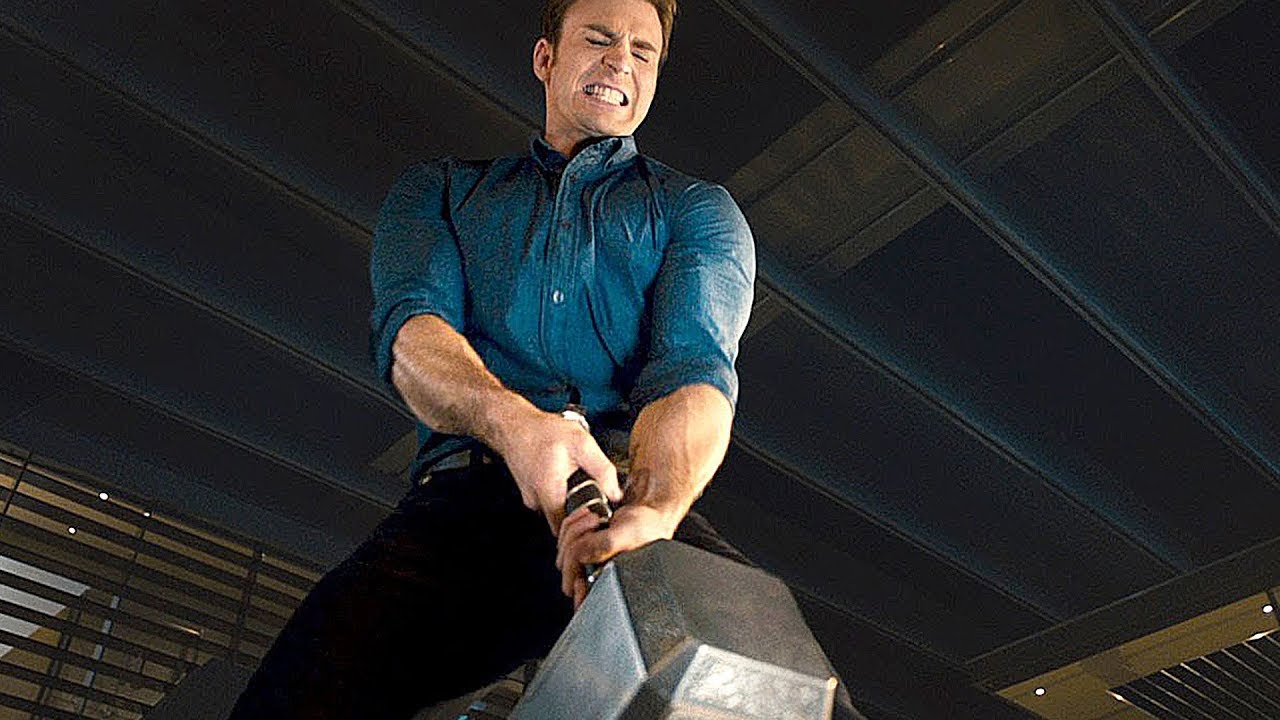 Although the second Avengers movie was not quite up to the scratch of the first, it did have moments which showcased the work that Marvel had put in up to that point. This scene in Age of Ultron, also used to market the movie in a trimmed version, would demonstrate a lot of character traits, how far the characters had come, as well as set them up for an inevitable fall.

It is such a simple set-up for the scene. After a celebratory party for another Avengers success (a party which had plenty of comedic moments of it’s own) the remaining Avengers sit around and Jeremy Renner’s Hawkeye calls out the myth of Thor’s hammer: “Whoever holds this hammer, shall he be worthy, may possess the power of Thor.”

It is simple but perfectly executed. Each Avenger will now try to lift Thor’s hammer. It would seem pretty obvious and clearly nobody else could lift it (more on that later) but the magic behind the scene is how it manages to convey traits of each character.

Hawkeye is the everyman, he tries but of course can’t do it. The arrogance of Robert Downey Jr’s Tony Stark is clear. He swaggers up to the hammer, sure he can lift it and then gets the shock when it won’t budge. The addition of both his Iron Man gauntlet and help from Don Cheadle’s War Machine also adds to the comedy.

The funniest moment of the scene comes from Chris Evans Captain America. Known for being a “boy scout,” loyal, fair and selfless, he is as close to being “worthy” as you get and as the ex-soldier tries to lift the hammer, you see it budge slightly.

The selling point of this moment is in Chris Hemsworth, who’s expression says more than words ever could. The worry on his face and then the flash of relief is enough to convey a whole scene worth’s of issues had that hammer been lifted.

The icing on the cake is Mark Ruffalo showcasing the geek in Bruce Banner as he tries to “fake-Hulk” and then Scarlett Johansson’s Black Widow not even trying, “that’s not a question I need answered.”

Of course the end of the scene is with Thor proclaiming “you’re all not worthy” as he casually flips the seemingly impossible to lift hammer in his hands. It is a perfect example of the heroes friendship, their success, their individual characters and a nice contrast for the future, divisive events of the rest of the film (particularly as Ultron makes himself known immediately after).

That isn’t all this scene represents though. A huge addition to the Marvel Cinematic Universe came in the shape of Vision and when Paul Bettany’s character first appears, he shocks everyone by actually lifting Thor’s hammer. Like Hemsworth’s silent reaction in the previous scene, this is again reacted to wordlessly, everyone in the room knowing what it means without actually having to say it.

Overall, the hammer lifting scene in Age of Ultron is a perfect example of why Marvel’s Cinematic Universe works so well. This isn’t a fad or gimmick. Marvel have built unique, clear and very interesting characters, who only become more interesting when they are thrown together and this sort of scene demonstrates why.