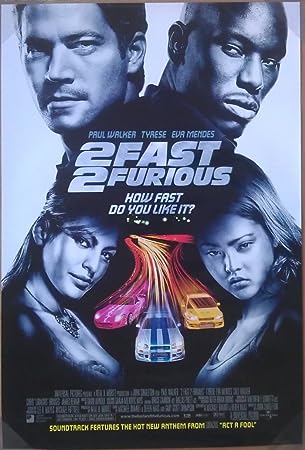 When you divide the key ingredients for a sequel to The Fast and the Furious they boil down to this; fast cars, sexy women, racing and Vin Diesel. Unfortunately, rather than Vin Diesel, who for reasons that will become very clear didn’t return, we are left with the only returning character being Paul Walker’s Brian O’Connor: the weakest of the characters from the original.

Fortunately for 2 Fast 2 Furious, as well as a stupid name, it has all those other key ingredients. The cars are back, the woman (this time in the form of Eva Mendes and Devon Aoki) are very sexy and there is some racing, although not as much as you’d think. 2 Fast actually tries to add some depth to the series and that means making this more about crime and a villain than actual racing.

Unfortunately, this story isn’t particularly a very good one. The plot is fairly standard. Walker must go undercover (again) and infiltrate a drug cartel and then use his skills to drive (obviously) money to the border. Hardly inspiring and made even less so when the gaping hole where Vin Diesel should be is filled by music star Tyrese in the form of an old friend of Walker’s who bares a shallow grudge. Now as well as being a sequel to rip-off of Point Break, this is also a cheap buddy-cop movie.

There are other lessons from the first film that still haven’t been learnt. Walker is still gurning and grinning his way through scenes as a substitute for actual charm, the movie drips with enough testosterone to match an angry football team and the script is as dire as ever, with people still insisting on talking in car metaphors.

Like the first film though, the saving grace is the action sequences. The racing is as well-staged as the first, with the camera telling a story of the racing which involves the mechanics of the car as well as the racers driving them. Add to this some decent enough stunts and cool set-pieces and although you never get any moments which match the opening and finale of the first movie, you at least get scenes which are cool.

Which is the final saving element of 2 Fast 2 Furious, it is still a cool movie. It still has a great soundtrack. It has cars which you want to drive, a lifestyle that looks appealing and some characters, like Ludacris’ Tej, that you would gladly hang-out with. There is something that draws you in to 2 Fast 2 Furious and although it never really catches the magic of the first, it comes close in some instances.

Overall, 2 Fast 2 Furious falls into all the same traps of the first film with a shallow plot, poor acting and dodgy dialogue. The action works though and there is enough genuinely cool elements of the film to save this from being a disaster.