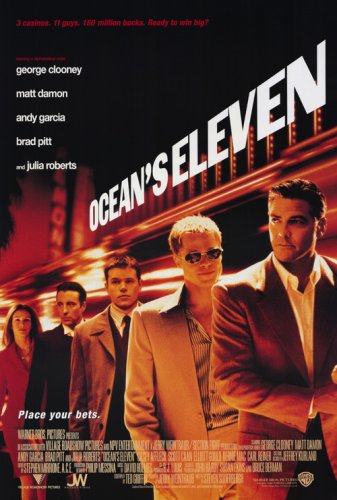 Hollywood don’t make films that are “cool” anymore. Movies are trying too hard to be dark and gritty or to make their comedies gross-out and silly, that nobody is appealing to the market that likes their films stylistic, flashy and oozing with credible star power. George Clooney was clearly one of those people though as he masterminded a film that manages to capture the old school spirit of Rat-Pack Hollywood.

Of course, it helps that Clooney is helping to remake a Rat-Pack classic, Ocean’s Eleven, but unlike a lot of unnecessary remakes, there is a charm and enjoyment to this movie which makes it feel relevant and worthwhile. For starters, the story is timeless. A group of thieves pulling one last, seemingly impossible job. It is the kind of story which, if told well, will always appeal, with likable rogues getting the better of a moustache twirling, classic villain.

This is where the cast is the most important. The heroes will only appeal if they are played well-enough to make thieves seem like the good guys but luckily, that isn’t a problem for the heavyweight cast Clooney puts together here. Clooney is the leader, Danny Ocean and has no problem being the charismatic but fallible head to the whole operation.

Joining him is some of Hollywood’s A-List and they are used to great effect. Brad Pitt is Ocean’s right-hand man, Matt Damon is the rookie thief trying to prove himself, Bernie Mac lends comedy while Casey Affleck and Scott Caan show early career promise as a couple of youthful tech-geeks. Add to this the villainous Andy Garcia and love-interest Julia Roberts and the cast should sell the film before the story begins.

It isn’t all perfect though. Don Cheadle is required to play a British bomb-expert and puts on the single worse cockney accent since Dick Van Dyke which doesn’t seem like a big deal but quickly distracts each time he is on-screen. It doesn’t do enough to hurt the film but is noticeably and notably bad.

The story more than hides his awful accent and Ocean’s Eleven follows all the classic heist movie beats. It brings together the team in a rag-tag style, it has a great planning montage and plenty of tense set-ups before the heist can begin. Of course, it all comes down to the robbery eventually and that doesn’t disappoint either. The best heist films have planning within planning and moments which fail or go awry as the events unfold. Ocean’s does it all; ending with the classic heist rug-pull and a satisfying conclusion to the whole operation.

Which is why it is slightly baffling when you are left with a sense of something missing. Maybe it is because, in the tradition of classic Hollywood, everything is wrapped-up all too easily and that departs from modern cinema slightly too far.

Overall, Ocean’s Eleven is a great remake of classic Hollywood. It beings together an amazing A-List cast, a great heist story and best of all, a very cool style. It maybe too shallow and conveniently tied-up for many but for most it is a fun and enjoyable ride.