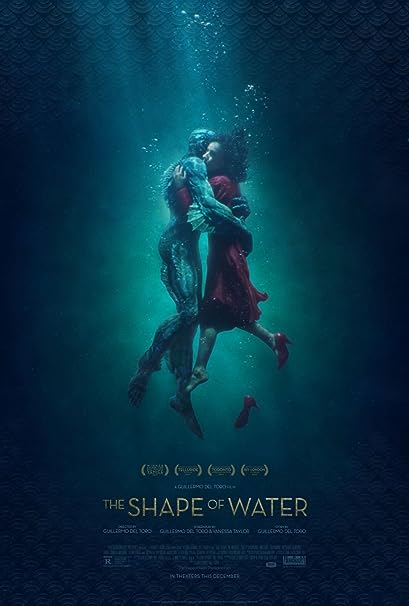 There is nothing in The Shape of Water that you haven’t seen a hundred times before. Disney have made Beauty and the Beast twice and as you watch this film, you soon realise that director Guillermo Del Toro has done so as well. This wouldn’t necessarily have to be a negative thing if it wasn’t so familiar, predictable and ultimately pedestrian.

Not that The Shape of Water doesn’t have any redeeming features. It is very well made and as with all Del Toro productions, the design of the environments that his characters occupy are full of dark, dim and (as a theme of the movie) damp features. From a secret lab, to an old-fashioned apartment above an old-fashioned theatre, through to a typical 1960s household, with it’s share of disturbing family-life, Del Toro cracks the scenes and the setting of them.

The characters within these scenes have a lot of layers to them as well and keeps the story from falling off a cliff completely. Rather than a typical, Belle style heroine, Sally Hawkins plays a mute, fragile but ultimately brave heroine for the movie and this lack of voice pairs well with the creature she falls in love with. The scenes where she communicates through action rather than words helps develop the overall relationship, even if it starts to take surprising and slightly weird turns as the movie progresses.

The support for the central pair are also strong. Richard Jenkins plays a closeted homosexual who reluctantly helps his mute friend and is cleverly in over his head, while Octavia Spencer is Hawkins best friend at work but finds herself painfully under-utilised.

Luckily, the same can’t be said for Michael Shannon as the principle villain. Shannon excels at these kinds of dark, demented and unhinged roles, played with a cool calmness but bubbling with unseen tension. This is no different but that also feels like the crux of the movie, as Shannon has played this exact same character in many other movies already.

With a cast this strong, it is a crime that their personal and individual storylines are so painfully under-developed. A story of being a homosexual in 1960s America or the broken marriage of the under-appreciated Spencer are touched upon but never actually explored and it feels like an opportunity is missed, particularly when the central tale is so predictable and rather dull.

Being Del Toro, it is approached with a more mature tone and there is plenty of gore, adult scenes and shockingly of all, sex. This isn’t enough to set it apart from any other tale of star-crossed lovers though, even if one of them is a fish-man, and anyone that has seen even a handful of movies with a similar theme will be able to guess where the story is going and how the scenes will eventually play-out.

Overall, The Shape of Water showcases the vision and talent of Del Toro to bring some interesting effects and characters to the big screen but his story is too familiar. Very promising storylines feel skipped over in place for a love-story between a mute-beauty and a fish-beast.