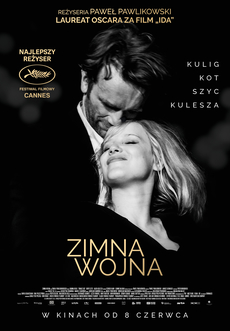 Although Cold War never feels like it is relying on a gimmick, there is a fairly clear one at it’s core. Similarly to One Day, Cold War tracks the relationship of Zula and Wiktor, played by Joanna Kulig and Tomasz Kolt respectively. The only time we see the relationship is when the two characters are in the same location and this is a relationship of prolonged splits and years apart, although circumstances never fail to bring the couple back together.

It is a relationship that is very compelling. The chemistry between the two lead actors is fantastic and sells the drama and love so well. They are convincing in the moments of bliss but believable in the more dramatic moments of break-up and fallout. It is a relationship of ups and downs but never stops being rooted in realism. It also has plenty of great story-arcs, from their initial snatched glances and awkward conversations to the finality of them ensuring they will be together forever. The relationship is never easy but is always interesting.

This is where the “gimmick” of the movie comes into play. This has it’s positives and negatives. The positives is that it keeps the story moving at a clear pace. Years pass and it is left to the audience to fill in the gaps of where these two characters are with their lives when the story resumes again. This is done through snippets of conversation or just the appearance of a character compared to when you saw them before. It is a clever story-telling device and makes this unique compared to most love stories trying to tell the same sort of tale.

Unfortunately, what it makes up for in originality it then lacks in depth. The relationship needs more for the audience to attach itself too. The initial meet and hook-up between the two characters doesn’t feel developed enough and doesn’t seem convincing when the two characters decide to start changing their lives for each other. At times the story takes interesting roots or hints at larger stories which you are desperate to know more about. A character has a stay in prison, changing their life forever, while another does drastic things to ensure that the two can be together once again. These things are hinted at but the film feels like it could be better for seeing some of these events played out properly on-screen. At a swift 90 minutes, the movie has the time to spare.

Overall, Cold War is a well-told love story which takes a unique view to showing the dramatic relationship of two people destined to be together but at odds also. It tells the story well, giving the audience plenty to hold onto and work out themselves, although often this proves to be the movie’s downfall as well.