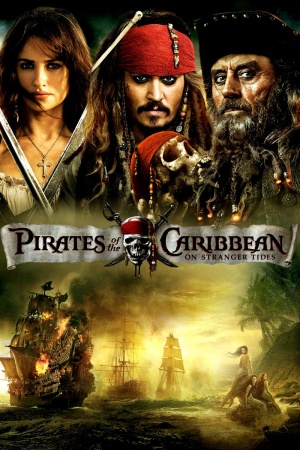 Pirates of the Caribbean works best when it’s not about Jack Sparrow. I think most people would agree that since the first film, the Pirates of Caribbean franchise has never really managed to rekindle that magic and it is because of one character, Jack Sparrow. The problem Disney and Jerry Bruckheimer have is that after they made the first film, what they created was one of cinema’s greatest characters. Johnny Depp had embodied a brilliant, funny, devious, courageous, bad boy pirate who is fantastic to watch and brings excitement and sparkle to the screen. What this led to was Disney and Jerry doing what most people would, try to make the following films about Jack Sparrow. Take whatever plans you had previously and bend them into something to do with Jack Sparrow.

This, in my opinion, is the reason they lost the magic of the first film. The first film was a fantastic, simple, supernatural but fun pirate story that just happened to introduce us to a memorable character. That character got enough screen time to be memorable while at the same time giving enough space for the story to develop through the also excellent characters played by Orlando Bloom and Keira Knightley. Not to mention Geoffrey Rush, Mackenzie Crook, Lee Arenberg and Jack Davenport. It wasn’t a story about Jack Sparrow, it was a story that just happened to include Jack Sparrow.

What came next were two films that tried to do too much. They tried to tell a story that was complicated, while introducing brand new characters with their own backstorys, have enough action set-pieces to stop it being boring and bogged down with plot while at the same time try to put Jack Sparrow on-screen at every possible moment. They also made the classic movie-mistake of trying to tell a story over two films, something I’ve yet to see work.

This brings me to the fourth installment. The last trilogy was wrapped up nicely. There were no unresolved plot points, characters who still had vendettas or anything that needed to be addressed in this new Pirates film. There would even be an argument for not including ANY of the previous characters (including Jack Sparrow.) Most importantly though, it was chance for a fresh look and an opportunity to repeat the success of the first film, not the mistakes of the second and third.

On the positive side, the story isn’t trying to be too ambitious. We have a good, simple, supernatural but pirate focused story that doesn’t necessarily have to include Jack Sparrow. There aren’t a handful of characters, each with their own aims, all trying to outwit and outplay each other, vying for screen time. Jack Sparrow is back, but you can’t argue with that because he’s the best thing in this franchise. Johnny Depp plays him as ably as ever and shows us why these films demand his presence on-screen at almost all times.

To add to the great character of Jack, we also have the inclusion of the pirate legend Blackbeard, played excellently by Ian Mcshane, who is both humourous and scary in equal measure. Adding a love interest and a little bit of a back story to Sparrow is Penelope Cruz who has one of the best introductions to the series so far. So the story is good, we have Jack and a couple of new, interesting characters to keep the film running at pace.

Unfortunately, some of the old mistakes rear their ugly heads again. Geoffrey Rush is back as Barbarossa. I think Barbarossa is a great character and Geoffrey Rush is great playing him but he is so unnecessary. A good chance to introduce a new character or flesh out the roles of the ones I’ve already mentioned is wasted on a character who doesn’t need to be included in this story. Along those lines, the film tries too hard to introduce a pair of Orlando Bloom and Keira Knightley clones. A missionary and mermaid have an under-developed relationship that would have been better cut from the film than included but rushed.

I would say that the positives outweigh the negatives but only just. The action sequences are as amazing as always and you can’t argue with what Johnny Depp brings to these films. Jack Sparrow is the reason this film was made but thankfully he isn’t over-used and depended in a ridiculous manner. Instead, the story holds its own with the best characters being given the right amount of screen time.

Overall, it still doesn’t match up to the magic and success of the first film but does avoid some of the mistakes the second and third film made. It isn’t perfect but Johnny Depp and Ian McShane make it more than watchable. Whether it could last what I’m sure is an inevitable fifth film is yet to be seen. Does Jack Sparrow really have that much more life in him?

2 thoughts on “Pirates of the Caribbean: On Stranger Tides (2011) Review”