3 of the Best vs 3 of the Worst is exactly what it sounds like – 3 of the best examples of either an actor, film series, genre, etc. versus 3 of the worst. It’s also an opportunity for you to have your say on my choices and whether you would have placed something ahead of my best or my worst. This week…. Bruce Willis!

It seems fitting considering he is starring in the fifth installment of his brilliant action franchise that I take a look at Bruce Willis’ career to launch a new feature. I’m a huge Bruce Willis fan, putting him ahead of both Stallone and Arnie when it comes to action stars. He also has some great examples of “straight acting” too, which proves that he is more than just a sweary, bald guy who knows how to handle a machine gun.

This goes without saying really. The pinnacle of action movies and the best thing that Bruce Willis has ever done. He is wise-cracking, desperate, violent and funny, all in one incredible character. John McClane is a fantastic character and the biggest reason that the fifth film in the series doesn’t work is because it doesn’t feel like Willis is playing the McClane he plays so brilliantly in the first film.

This came close to the number one spot. I love Unbreakable because it’s so subtle, intense and brilliantly acted. Sixth Sense demonstrates that Willis can play a serious, straight, dramatic role. Unbreakable proves that he is actually very good at it. He isn’t playing an openly, heroic, confident character yet you are rooting for him throughout, especially in the brilliant finale when he discovers his true calling. One of my all time favourite films and a great Willis performance.

It was between this and Sin City because Willis has a similar part in both. He’s the hero of the multiple story movie. The recognisable face who gets things done. Pulp Fiction just about tops Sin City because he isn’t playing his stereotypical action hero but actually playing a reluctant hero, more in kin with the character from Unbreakable. He is still the hero and gets to do some very cool things, but he isn’t being John McClane, which demonstrates more to Willis than you’d expect.

This is included because it’s so far removed from Die Hard its shocking to even claim the name. It could be any of the generic action films that Willis has produced before. I like the action, the story is ok but I was expecting Die Hard, not Mercury Rising or Striking Distance. It’s the biggest disappointment of any of Willis’ films and feels even worst because Willis seems to give a lazy performance rather than playing his most iconic character properly.

I liked The Whole Nine Yards. It was a very funny film and putting Willis and Matthew Perry together was a very good idea. This is a very good example of squeezing a sequel out of a story that has no continuing threads. Its unnecessary and results in an awkward mess of a movie. Willis isn’t the same, scary, funny character. The jokes are dependent on him wearing pink slippers and an apron. Willis is better than this and he should know it. 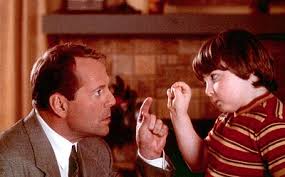 When I first heard about this film, I thought it was going to be a very good idea. Willis being funny with a wise cracking kid to play off against. Instead we get a sappy, unfunny movie which is steeped in moral and message. This was out around the time that Willis announced he was stepping away from action films. The Sixth Sense and Unbreakable showed that there was mileage in that claim. The Kid would send you screaming back to a machine gun, but maybe not in a good way.

Overall, luckily for Bruce Willis, his best clearly out-does his worst. In fact, a look at his career is a glimpse at a very good movie list. Alongside the three best you have Armageddon, Sin City, The Last Boy Scout and The Fifth Element. Though there are some more films that could have made the worst list, Willis can usually be relied on to make a decent movie.

Now its your turn. Agree with the decisions? Are there any films you’d swap in? Or movies that I’ve picked that you hugely disagree with?