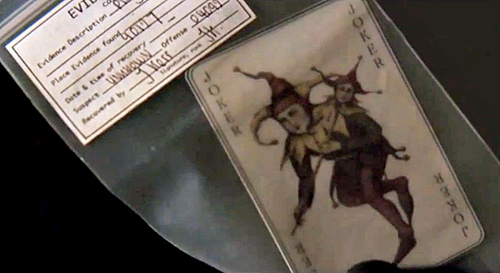 The film has ended, the villains have been vanquished and Batman has officially Begun. However, Christopher Nolan kept one last surprise for the final scene in the movie and what occurs here sets the tone for the next film (the best in the series and my favourite of all time). It is remembered for the reveal but there is so much more going on in this scene that makes it one of the 100 greatest;

Any comic book fan will recognise the now standard scene where Commissioner Gordon (lieutenant in this scene and played by Gary Oldman) talks to Batman, played by Christian Bale, about whatever villain is harassing Gotham. In the comics he uses the Bat-Signal to bring him to the top of the police station and this scene is no different.

The Bat-Signal is a now key part of the Batman mythology but here it is dismissed as quickly as it is acknowledged. Batman says “nice” and Gordon makes a wise-crack that refers to earlier in the movie. It is the perfect example of Nolan’s take on Batman, very ordinary, realistic and without any unnecessary grandstanding.

This carries over to the biggest and best part of the scene. Gordon begins to explain the main issue with Batman. He is a masked vigilante and people now get more extreme to match his efforts. You’d be forgiven for not seeing where this is going until Gordon mentions a “calling-card.”

When Batman turns the card over and reveals the Joker, I can’t help but get goosebumps. It isn’t a huge moment. It is done quietly, innocently and after seeing The Dark Knight, it is a great piece of retroactive foreshadowing as neither Gordon or Batman realise how bad this person will be. The response from Bale’s Batman demonstrates this. No theatrics, no large speech or gravitas – just “I’ll look into it.”

That isn’t the end of the scene. There is one more little moment. This one manages to summarise the whole relationship between the Gordon and Batman. As Gordon tells Batman “I never said thank you” Batman replies, this time with a slight dramatic pause, “you’ll never have to.” With that, Batman jumps off the rooftop and in 2005 I get genuinely upset because I realised that it would be at least another two years before I get to see Nolan and Bale’s Batman on the big screen again – but it was well worth the wait.

Overall, the final scene in Batman Begins manages to finish the movie perfectly and tease the sequel effortlessly. It isn’t a huge scene but that doesn’t make it any less important, as it introduces the Bat-Signal, secures Gordon and Batman’s relationship and teases the greatest villain in comic book history.