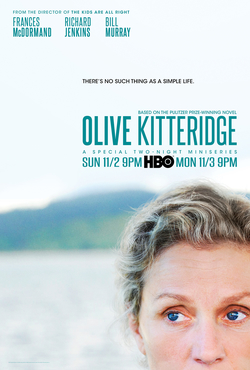 There is a tradition in television of creating obnoxious, sharp and cruel characters who deep-down, have a heart of gold. Whole series are focused around these types of characters, from House to Backstrom. As nasty as these characters can be, eventually they demonstrate some redeeming feature that keeps the audience on their side. Olive Kitteridge lacks that redeeming feature.

Kitteridge is a character that feels like the familiar, no-crap, “tell it like it is” type of person that audiences flock to but as the mini-series unfolds, there doesn’t seem to be any redeeming features. Kitteridge slowly alienates the people around her, from family to potential friends and although she is nasty, cruel, distant and at times difficultly stubborn, you still find yourself on her side (most of the time).

This is down to the excellent Frances McDormand who plays the role straight and sincere. She sells the pain, disdain and even sometimes sympathy so well that you find yourself wanting her to make the right decision and say the right thing. It is also jarring because McDormand usually plays character with so much more appeal, from Marge Gunderson in Fargo to Linda Litzke in Burn After Reading. Here she seems more like the witch that the local kids accuse of her being.

It doesn’t help that her supporting cast of characters are so likable compared. Kitteridge seemed to surround herself with people of character and heart, from put-upon husband Richard Jenkins through to son Christopher played by The Newsroom’s John Gallagher Jr. The whole TV series is stolen quite successfully by the ever charming Bill Murray.

Murray actually plays down the usual comedy eccentric and is a widowed, tired and lonely man who matches Olive for disdain and spite. There is a great chemistry between him and McDormand which lifts the series as it comes towards it’s end.

Not that there is some grand finale to speak of. In fact, the whole series moves at a snail pace, preferring to tell the story in a more realistic but no less dramatic way, relying on dialogue, large pauses and the impact of what is not said rather than huge grandstanding moments. The one part of the story which does elevate the tension to slightly unusual heights, with a robbery at a hospital, actually feels out of place because of how ordinary but ultimately “normal” the rest of the series had felt.

Overall, Olive Kitteridge is a simple tale of a spiteful lady who watches as everyone and everything around her begins to leave, die or fall apart but somehow this is compelling television. This is down to the great performances, from a perfect supporting cast but ultimately from Frances McDormand herself who plays against type to tell a painful but very realistic story.

Best Episode – Security: The last episode is a fitting end to the series and introduces the excellent Bill Murray.

Should there be another season? – No, it is a decent, contained mini-series story.