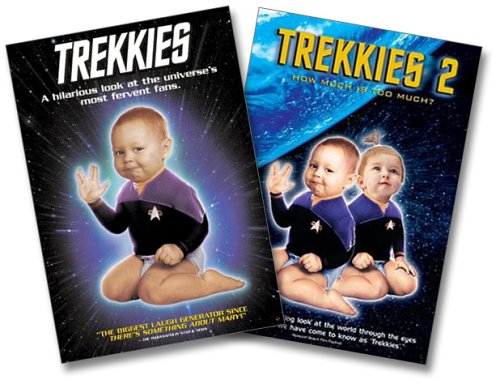 I wouldn’t usually review two movies together but Trekkies and it’s obviously titled sequel are so similar, it may have been the same movie. Not that there is much to the documentary. Trekkies is exactly what it says in the title, a chance to explore and learn about the Star Trek fan culture, the extreme side to the conventions, to the stars which have been directly effected.

It is an interesting concept for a documentary, or at least it would be it weren’t for the very low-budget the film is produced on. 1997 is a while ago now but the production value feels very poor and the whole idea behind the movie very basic. It is essentially find fans, ask them about Star Trek, gawk at their extreme fandom and then repeat.

There are some elements to make this a worthy piece of Star Trek commentary. The documentary’s presenter is Star Trek: The Next Generation star Denise Crosby, who does a passable job as the interviewee but at times seems uncomfortable to be thrown into the same environment as the “super-fans.”

The fans are, of course, the central focus of the movie but it treads a difficult line. A documentary without a purpose can lose it’s direction and Trekkie’s purpose seems to be highlighting the extreme nature of the fans, almost painting some in a less than positive light.

The documentary never openly mocks the fans it features but also doesn’t hide the extreme. Everything is covered from a dentist who runs a Star Trek themed practice, a man who lives in the bridge of The Enterprise to a keen Star Trek fan who looks uncomfortable in his owns skin called Gabriel Koerner.

Luckily, Trekkies 2 allows Gabriel a chance to comment on how the film affected him and it seems the first movie gave some fans notoriety rather than positive fame. It is slightly baffling that they would sign up for a second movie or that the second movie would stay with the same tired format, this time mixing it up slightly by going abroad to various Star Trek conventions.

Adding some credibility to the movie is the contributions from the stars. Whether the actors featured actually made their contributions specifically for this movie is slightly dubious, as none of them seem to have a clear idea of what their contribution is. They also seem to be used sparingly considering their are one of each movies biggest strengths.

By focusing more on the fans, unfortunately the movie becomes quite dull. There is only so much of the extreme behaviour which is entertaining and without any direction in the film or clear purpose, it just feels like a collection of features on random Star Trek fans.

Overall, Trekkies 1 and 2 is the best place to explore the Star Trek fandom, with stars giving their opinions on the craze and a good collection of fans contributions over both movies. Unfortunately, these don’t seem to be organised or arranged well, with no clear direction and purpose, which leaves both movies lacking in interesting material.