These days you can’t have a year without at least one boxing movie. The same can be said for American Football, sometimes baseball and occasionally basketball. There was even a spate of golf movies at one point… that’s right, Golf!

Yesterday we reviewed Gleaming the Cube and while there is no competitive skateboarding, it got us wondering what other unusual sports have featured in the movies. We start with a Sylvester Stallone classic and by the end of the list get a bit more futuristic…

Over the Top was a ridiculous sports movie at the height of the Sylvester Stallone action era. The movie features the world of competitive Arm Wrestling, leading to the World Championships in Las Vegas. A $100’000 prize and a new truck sums up the kind of people who compete and it is slightly difficult to get invested when it boils down to two men holding hands sweating a lot. 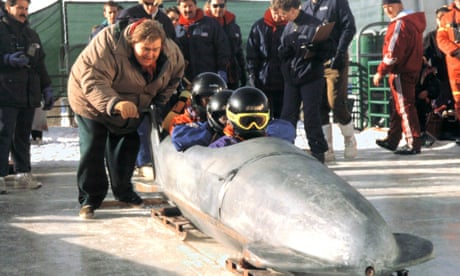 Cool Runnings is a childhood favourite and a classic. It isn’t particularly a sport which features in the movies because watching five men in a bath sliding down a hill doesn’t usually get the pulse racing. Making it a fish-out-of-water comedy film about five Jamaicans at the Olympics was a master-stroke and probably the reason there aren’t too many more bobsleigh movies.

Like bobsleigh, downhill skiing works more on the character taking part than the actual sport itself. A sport which lasts less than a minute to actually compete is difficult to frame a movie around but a man who doesn’t know when to give-up and his alcoholic coach who looks like Wolverine makes Eddie the Eagle a surprise hit.

We are in the territory of invented sports now. What is basically basketball mixed with baseball mixed with “gross insults” is easy enough to play but hardly going to become a mega-hit like it manages to in the movie of the same name starring the boys who created South Park.

Still made-up but less easily to play. Less easily because there are people who actually “play” the magical sport which was made famous by the Harry Potter series. How you play a sport which involves magic broomsticks, a flying ball and what seems like basketball or croquet with throwing is beyond me but it looks awesome when the wizards play it.

We are now in the future completely (although in the original it was 2018) and a pretty violent sport like Roller Derby is made even more extreme by adding motorbikes, a magnetic ball and very violent contact. Can’t see it taking on but the huge global corporations controlling teams and sports in general isn’t too far into the future.

Let’s take the competitive nature out of the sports and make it purely a manhunt which is televised. This would be expanded upon in both The Hunger Games and Battle Royale but Running Man seemed to start it all, with Arnold Schwarzenegger being pursued by “stalkers.” This one feels less like a sport but scarily like a reality, with reality TV getting more and more extreme with every new incarnation.

Overall, seven sports which don’t get enough exposure. Some can be played, others can’t but could well appear in the future if the world continues to get more extreme. As for the ones that already exist, maybe the world is ready for a second movie about bobsleighs.