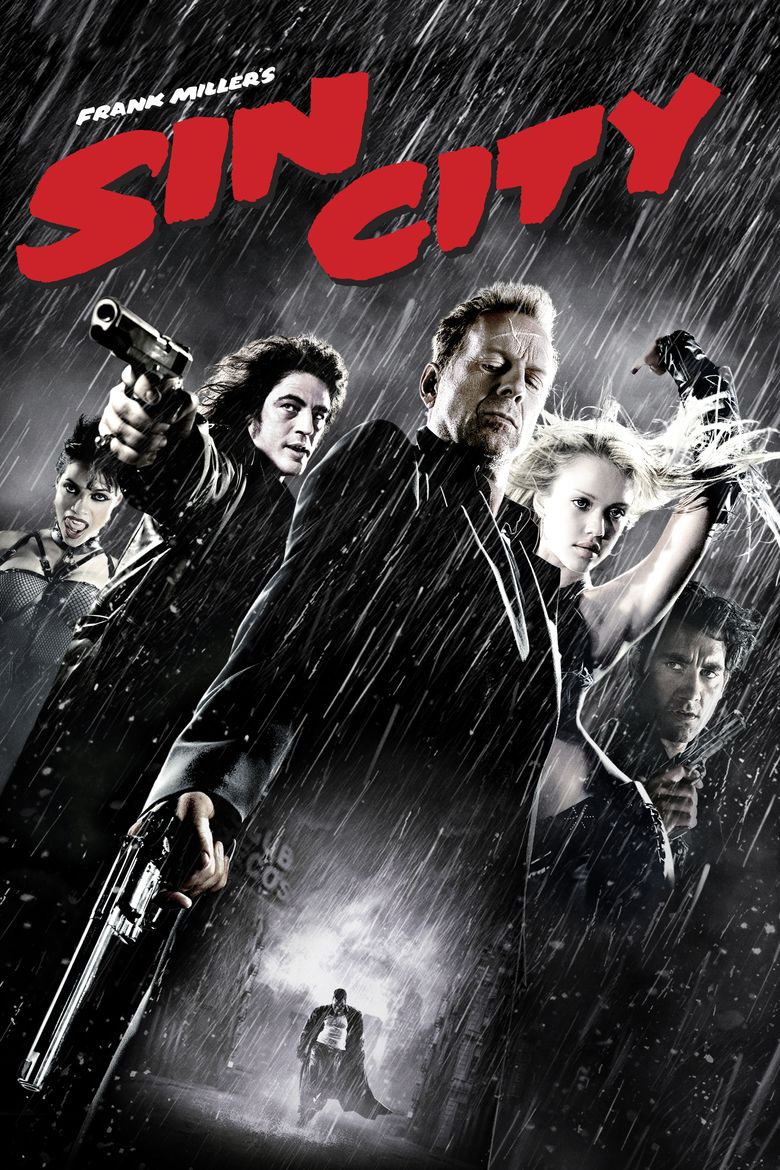 Many films try their best to closely adapt graphic novels but few do it as successfully as Sin City. For most adaptations, something has to be lost in the translation but for Sin City, all the grit, grime, violence and nudity that would make the graphic novels so difficult to translate is present. There are also some amazing stories too.

It would be easy to forget the three great narratives within the Sin City movie because of the striking visuals. The black and white comic is closely adapted, down to the colourless palette except for extreme bouts of blood and one particularly yellow character. It adds a great comic book effect and makes the copious amount of blood and violence even more graphic without having to show very much more.

Not that the stories need that style and tone to succeed but it definitely helps. Frank Miller’s original stories are short, detective or gangster tales with a noir feel. This helps deliver a world of “gorgeous dames,” “killer hookers” and “corrupt cops” that you can’t help but lose yourself in. The movie itself is split into three distinct chapters, all different stories and all tales which if extended, could have held a film of their own.

Of the three tales, the one starring Bruce Willis as Detective Hartigen is the best but that takes nothing away from the excellent revenge tale starring Mickey Rourke or the bizarre case of a talking decapitated head that stars Clive Owen and Benicio Del Toro. Those four cast members alone would be enough of draw for any movie but this is a film which pulls in star turns from Jessica Alba, Michael Madsen, Rosario Dawson, Brittany Murphy and even an almost unrecognisable Nick Offerman.

What makes the cast even better is that they all step up their game. Bruce Willis is the best he’s been since Unbreakable and hasn’t delivered a better performance since, Mickey Rourke only equals this role with his turn in The Wrestler and the less said about Elijah Woods in this movie the better. His performance is best seen without prior warning.

This is because the stories are fantastic, unusual and compelling. They are a more traditional, noir style tale and it takes you back to an older style of movie-making but with clear CGI, green screen and cool effects. There are even smaller vignettes or tales told to the side of the main plots which could be explored even further. The world of Sin City is fleshed out and delivered in one movie but feels like it could sustain a whole franchise of films or even a TV series.

Overall, Sin City is as close to a graphic novel on-screen as you’ll as ever get. It is violent, creative, imaginative but best of all, well-written and compelling. It has an amazing cast who each put in some of the best performances of their career. A modern classic.