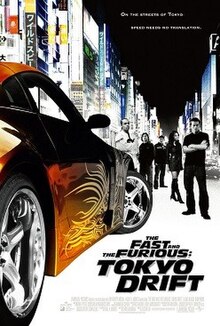 It would be easy to write Tokyo Drift off as a cheap sequel cash-in. For starters, none of the original cast return from either the first movie or the sequel. Secondly, the focus has shifted completely, this time looking at teenagers racing cars rather than drug lords and undercover cops. Finally, it’s moved to Tokyo and concerns a completely different style of racing.

This is the saving grace of the movie though. Tokyo Drift doesn’t try to be a Fast and Furious 1.5. It has the same aspects which means it can keep the Fast and Furious name; fast cars, pretty girls, a hip-hop soundtrack and most importantly, angry young men racing each other. This time the racing is drifting though, a new style of driving which is different enough and cool enough to make Tokyo Drift stand-out from it’s franchise predecessors.

This means that we get some very cool sequences where cars slide around corners, narrowly missing obstacles or walls as they take turns without losing speed. The opening sequence featuring this technique, staged in a multi-storey car park, uses a great contrast between the villain who is an expert and our hero who is a novice (but with passion).

Rather than be Fast and Furious, Tokyo Drift almost feels like The Karate Kid with Cars. Lucas Black is the American who is transferred to Tokyo to “straighten-up” but while there must master this new driving technique to defeat the bad guy (this time played by Brian Tee, who is unfortunately named the Drift King). There is even a Mr Miyagi type mentor in the form of Sung Kang’s Han.

It all feels familiar because it isn’t anything necessarily new or original. That doesn’t mean it is bad though and as long as you want a movie about racing, getting the girl and defeating the one-dimensional bad guy, Tokyo Drift will entertain. Fast and Furious has always been about the action sequences anyway and while there aren’t any impressive set-pieces like truck heists or driving cars into boats, the opening race and the final race are exhilarating enough to keep you on the edge of your seat.

Overall, Tokyo Drift may seem like a forgettable, cheap Fast and Furious knock-off but there is a lot to like about the small movie trying to do something different. The new racing style makes it unique, even if the general plot doesn’t and the action keeps it interesting. It even has a very surprising cameo to give it franchise credibility too.

One thought on “Fast and Furious Month: The Fast and the Furious: Tokyo Drift (2006) Review”