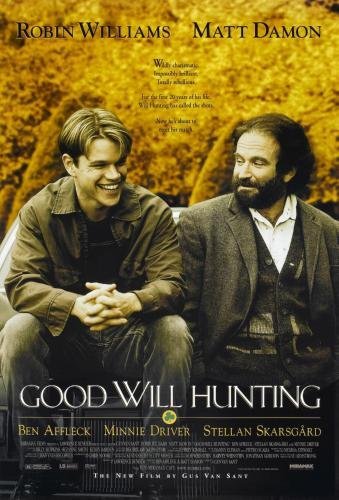 This month we review a selection of movies from Empire’s 100 Greatest Movies list. Today is Number 96: Good Will Hunting.

The hook of Good Will Hunting is the type that could launch many different styles or genres of stories: a university janitor anonymously solves a near impossible maths puzzle. Good Will Hunting uses it to tell a story about belonging, identity and reaching your potential. This could have been fairly dull but Good Will Hunting has two key aspects which make it work; good writing and great performances.

The writing is famously done by a young Ben Affleck and Matt Damon. As a way to launch their respective careers, there is very few ways which are better. The two actors come from Boston and use this knowledge to craft dialogue which feels authentic. The scenes in which Damon’s Will Hunting and Affleck’s Chuckie are just hanging out with the men they group-up with feels like it could come from their real lives, from the way they speak to each other through to the fights and endless drunken nights.

It isn’t just capturing that authenticity. The support characters are well-fleshed out as well. Will Hunting is clearly the focal point of the story but each character has their arc and these are well-developed and never feel shallow. To bolster these are fantastic performances.

The two central figures in the film are Damon’s Hunting and Robin William’s as his therapist, Sean. Damon gives a performance which showcases the Hollywood elite he would become. He can be charming, funny, violent and as obnoxious as you could expect from an intelligent man trapped in a Boston construction worker. Williams is positioned as his opposite. Here Williams gives one of his few dramatic performances, showcasing the depth to his abilities as an actor. The scenes in which Williams and Damon have their therapy sessions are some of the best of the film and this is again down to how well written and acted the movie is.

That isn’t to say it doesn’t have its flaws. The writing can often get ahead of itself as well. Each character seems to get “their moment.” This usually comes in the form of a monologue, be it Will tearing apart the NSA or Affleck prompting his best friend to leave Boston and be successful. These do showcase how well-written the dialogue is and how clever the moments are but also stand-out in a script that is usually very authentic.

Which is where the second issue comes. Good Will Hunting is a movie of over-emotional characters. Key scenes are done at the level of 11 rather than something much more nuanced. Rather than people giving more understated reactions, people scream, cry and even punch walls. There are more nuanced moments, particularly one involving Affleck towards the end of the film, which makes the more dramatic moments seem random in comparison.

Overall, Good Will Hunting is a well-crafted drama which tells a small story in an effective way. The script captures an authentic feel and adds credibility to the story, which is then reinforced by the great performances. Slight deviations in tone and writing style aside, this movie is a great early mark for both Affleck and Damon’s career.