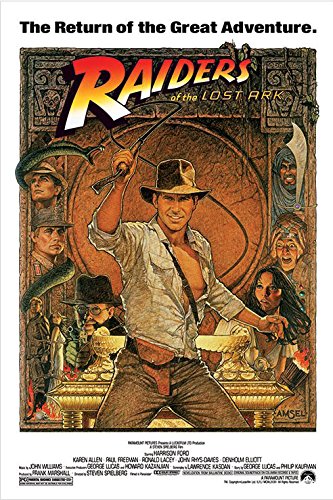 This month we review a selection of movies from Empire’s 100 Greatest Movies list. Today is Number 7: Raiders of the Lost Ark.

Raiders of the Lost Ark has arguably the greatest opening to any movie ever. Not many movies can hold your attention, keep you on the edge of your seat and then thrill you with action and excitement in a sequence which lasts less than fifteen minutes. Not only that, this sequence also manages to introduce the hero and the principle villain, and their specific characteristics, without feeling the need for pointless exposition.

From this blistering introduction, the movie never relents. What director Steven Spielberg has created with Raiders is a good old-fashioned adventure movie. It has a charismatic hero who isn’t an over-grown muscle-bound soldier but a fallible, beaten-up archaeologist. He wears a fedora and has a whip though which immortalises Indiana Jones as one of movie’s greatest heroes. It also helps that he is played by a smirking, cocky but lovable Harrison Ford in arguably his greatest role (“come at me” Star Wars fans).

The villains are the worst of the worst: Nazis. There isn’t a clear reason why they are doing what they are doing and they fit the “moustache-twirling” role of bad guys perfectly. Paul Freeman is Indy’s villainous counterpart Belloq and Ronald Lacey is Toht, a classic, stereotypical Nazi, down to the black uniform and mildly offensive accent. You want to hate them and see them fail which means you love the antics of Indiana Jones even more as he fights against the odds to stop them.

The last detail of the characters is of course the damsel-in-distress. Here, the damsel doesn’t really want saving and can hold her own. Introduced in a brilliant scene involving literally drinking a man under the table, Karen Allen’s Marion is a perfect counterpoint to Harrison Ford, giving as good as she gets and never really feeling like the screaming, token female.

The characters aren’t why you watch Indiana Jones movies though and Raiders has some of the best set-pieces in movie history. The opening speaks for itself but add to that a fiery bar fight, a great market town chase containing one of cinema’s best improvised moments, a daring car chase and the famous stake-pit scene and you have a movie which takes you on a thrilling and spectacle-filled journey.

It also does this without seemingly dumbing-down for it’s audience. Raiders is a family film which at times is not suitable for kids. People are on fire, get shredded by plane propellers, there are an abundance of scary skulls and the finale holds one of the infamously disturbing scenes from the 80s. Considering how far special effects have moved on, the outcome for the villains is still chilling and gory, even if it is clearly Plasticine.

To top all of this off, John Williams delivers one of the most iconic themes for any movie. The Raiders theme is a classic and helps add excitement to the action. The moments when the theme really hits is used perfectly, from the opening chase to the daring escape from the snake-pit.

Overall, Raider of the Lost Ark is classic Steven Spielberg movie-making. It is a shameless adventure story, with a courageous hero, evil villains and plenty of thrilling action. It has iconic moments which have changed cinema and proven that a movie from the 80s is still the one to beat.