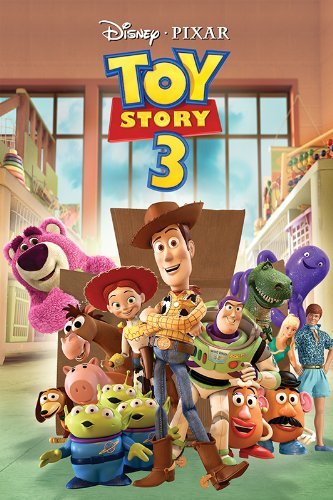 You could argue that Pixar got lucky with Toy Story 2. They managed to make a film as good as an iconic original without changing too much of what made the movie work so well. It would be easy to think that there was little more they could do with the story though but Pixar manages to prove this wrong and furthermore, they do so with such a simple and logical direction for the Toy Story saga.

Unlike many other animated franchises, Toy Story acknowledges time and that being a toy has a clear shelf-life. Toy Story 2 already touched upon this with Jessie the Cowgirl’s sad story of being neglected and forgotten by her “kid” and now the rest of the toys we’ve come to love have the same problem with Andy getting bigger and actually moving out to college. The movie starts with a melancholy tone and never really relents.

It is then about moving these toys away from their usual environment and placing them out of their comfort zone. This is always when Toy Story has worked so well, be it trying to cross a road or navigate a pizza restaurant. In the third movie, the toys are accidentally sent to a daycare and the premise becomes one of prison breaks and overthrowing a viscous dictatorship: so the usual animated children’s movie-fare.

As with every Toy Story movie, this is done with some great humour. The jokes never relent and Toy Story 3 could be the best yet for comedy. The characters we already know fit into their distinct roles so well, with some plays upon who they are and their well-established characteristics. Tim Allen’s Buzz Lightyear was always a cool character in the series but gets some his best material here, particularly when trying to “undo a reset” with surprisingly Spanish results.

As with all Toy Story movies, there is always a great range of new characters and toys as well. The daycare opens up a new range of possibilities, from a Ken for Barbie (played by Michael Keaton) to the lovable Lotso the Bear, voiced by Ned Beatty. The best character still remains Tom Hank’s Woody and he gets to be his heroic best here yet again, bringing the story together well and directing towards a thrilling finale.

Pixar are well aware that Toy Story is a franchise people have grown-up with and this, more than any other, feels like a movie aimed squarely at the parents reliving the film they loved as children. The finale is a great example of this, as we get a thrilling scene which is played to perfection and will have anyone invested in these characters holding their breathe and wondering how the toys will survive.

The real triumph is the final moments of the movie which manages to both successfully bring the Toy Story trilogy to a close while at the same time opening a possible new chapter for the characters. This scene alone will have anyone with a heart shedding tears and showcases how Pixar are both great storytellers as well as fantastic animators.

Overall, Toy Story 3 rounds off a perfect trilogy. It keeps itself fresh while changing very little about what makes Toy Story work so effectively. It breathes new life into the story while successfully drawing the key character’s tale to a suitable conclusion.