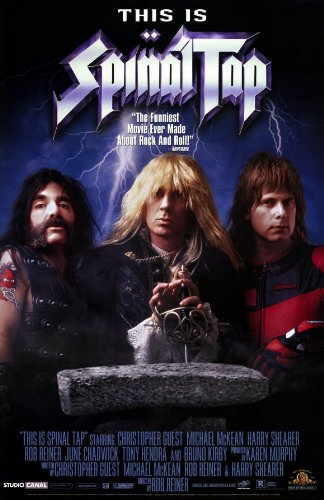 It is difficult to comprehend how influential This is Spinal Tap really is. It is probably not the first mockumentary but it is one of the best and would lead the way for so many other movies and TV shows that would follow a similar pattern. It makes such good use of the format as well, understanding the potential that “realistic” moments, seemingly behind the scenes footage and talking head interviews can give you for comedy gold… and Spinal Tap has plenty of comedy gold.

Almost every scene is a well conceived sketch within itself. It is a movie of key moments, from the now iconic “up to 11” through to the Stonehenge which is ridiculously small. There are so many jokes and so many iconic lines that it is easy to forget them or overlook them. The rate of jokes comes thick and fast and the magic is making seemingly innocuous scenes into great comedy fodder. Analysing the food at catering or dropping inappropriate songs titles after beautiful pieces of music are all included and make for great, hilarious sequences.

The songs themselves are another comedy goldmine. Writing music is hard, creating original songs is a skill unto itself but making them as funny and original as these is a masterstroke. They are also believable as well. These could be genuine rock songs from a genuine band (Spinal Tap did actually tour with these songs and others). They add a realistic layer which heightens the comedy further and makes the movie so much funnier.

The three key parts of Spinal Tap play their roles so well. Michael McKean, Harry Shearer and Christopher Guest are all fantastic and in a movie which is largely improvised, do not miss a comedy beat. They feel so natural in their roles and work so well together, being believable as a real band. It is also credit to director Rob Reiner who plays the documentary maker and keeps the story flowing as these seemingly random scenes occur.

The story is a great one too. It clearly mirrors so many different bands and their failed careers. You can find influences from The Beatles or Rolling Stones in the way the story develops but that works because it so cleverly parodies what has occurred in real life.

The real issue is that it ends so abruptly when it feels so much more could be done and told. There have got to be plenty of deleted scenes and cut footage which has probably resurfaced since but as the movie hits it’s stride it feels like it stops, cutting the enjoyment short before it gets chance to develop.

Overall, This is Spinal Tap is a legendary movie which defined comedy and mockumentaries as a genre. It has a great story, frequent and reliable comedy and follows what could be (and has since become) a legitimate band. Aside from the too short run-time, this is a fantastic comedy.