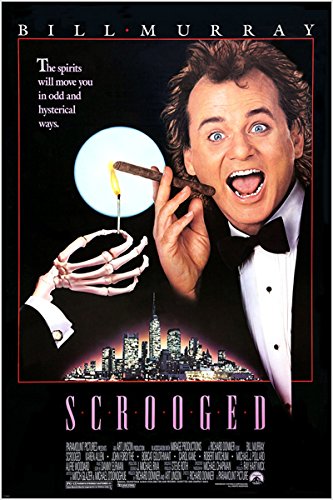 Charles Dicken’s A Christmas Carol has got to be one of the most remade, re-imagined and reinterpreted stories in history. It is no surprise considering how great a story it is but it is difficult to find a new approach to the story. Aside from adding Kermit and a fantastic Michael Caine, little is done to add anything new to the tale. That is until Bill Murray took up the mantel.

Scrooged is a dark, self-aware retelling of the story. Murray is a TV network executive who is putting on a fairly offensive version of A Christmas Carol himself when the events  of the classic tale begin to happen to him. Being familiar with the story himself adds another dimension while also giving Murray the freedom to do whatever he wants with the role.

Murray is clearly in his element here. He gets to play to his full range of shouted craziness and is loving very minute. From the cutting sarcasm of the opening television meeting through to the slapstick and comedy violence he undergoes at the hands of the equally as unhinged Carol Kane, Murray is on top form. He also stretches some of his dramatic acting muscles too, particularly in the movie’s darker moments.

And this is a dark movie. It plays the story of ghosts visiting Murray as the horrific prospect it would be. From the grotesque appearance of his old boss, played by John Forsythe through to the screaming souls within the Ghost of Christmas Future, Scrooged is balanced on the horror side and is not your typical Christmas film.

This is one of the movie’s strengths though and it is a shocking story, even if it is one that you’ve seen many times before. The events Murray sees are heartbreaking at times, very funny at others but realistic when recounting a man’s life. It is balanced so well with the bizarre ghosts brought to life by David Johansen and the aforementioned Kane.

This is another masterstroke of the movie as the story is brought up to the modern era very well. Framed with a period filming of the show Murray is producing, the ghosts are unique in their style. The Ghost of Christmas Past is a taxi driver taking Murray through time while Christmas Present is a fairy punching Murray into each location. It is effective because it offers something fresh to a stale story.

The story brings every element up-to-date well. Tiny Tim is not crippled but mute, while the story involving Scrooge’s brother is still in-tact and done effectively too. Even the lost love that pushes our protagonist into his wicked ways is brought to life by Karen Allen.

Overall, Scrooged is not your typical Christmas movie which is ironic considering it is the most recognisable and famous Christmas story (besides the Nativity). Murray is at his best while the story itself veers close to horror and very dark elements to retell the well-worn tale. A Christmas classic albeit an unusual one.