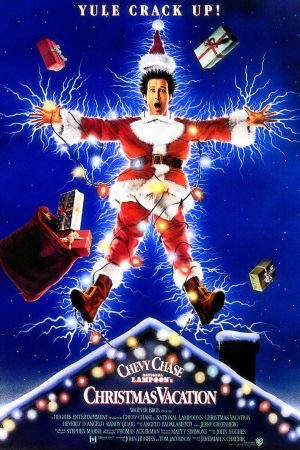 You could watch Chevy Chase having a meltdown in any situation and it would be funny. What makes Christmas Vacation so effective is because he is having a meltdown about all the same stuff that families are going through during the festive period. Each situation is turned up to 11 and certainly exaggerated but everything from unwanted guests, pesky Christmas lights and bizarre presents is covered here.

Chase holds everything together so well. He seems to know the perfect way to approach each scene. He has moments where he over-acts and plays for the huge laughs but other times sells the scene perfectly with a single look or moment. Even the slapstick of placing the lights on the house brings a huge laugh and Chase delivers this perfectly.

That is where the magic of Christmas Vacation lies. It is written more like a series of ever-developing sketches than a singular over-arching story. Chase is slowly losing his mind as his perfect Christmas falls apart around him and it is a joy to watch. The moments get bigger and more bizarre but Chase keeps the movie together.

He is almost too good as he steals the movie from anyone and everyone else. There are some great characters and key moments from other members of his bizarre family but none come close to how great Chase is in each scene. Even the over-exuberant Randy Quaid becomes annoying and clearly one-dimensional as the movie slowly progresses.

Quaid’s character is an example of some elements of the film not quite hitting the mark. For every hilarious mix-up about electrics and Christmas lights, there are poor scenes involving the irritating neighbours next door (Nicholas Guest and Julia Louis-Dreyfus) that drag the movie down and become nothing more than distractions.

This goes for the ending as well. The chaos can only go on for so long and although the ending does see Chase become unhinged, which is always funny, it does lead down a ridiculous path that looks clear that the movie didn’t have a concrete ending. In fact you want the ending to be so much more and so much better and it is a shame after all the great comedy work that precedes it.

Overall, Christmas Vacation is Chevy Chase at his best. He pitches his performance perfectly for each key scene and reacts brilliantly as the events escalate. It is just a shame that some of the comedy moments really miss the mark and that the ending fails to live up to what has gone before.