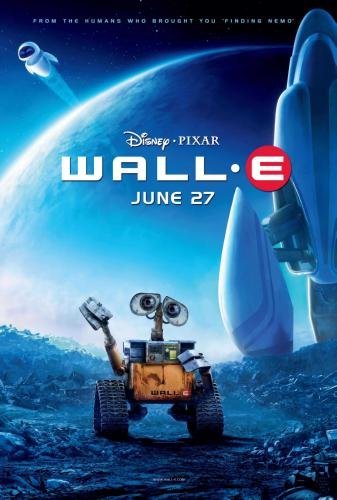 It is a bold move to have a character who doesn’t speak on-screen, alone, for the first act of a children’s movie. You have to depend on the character holding the screen with no inner-monologue, no outer dialogue and purely on body language alone. This is even more impressive when you consider Wall-E doesn’t actually have a human body and is a dumpy robot with only two camera-lens eyes for any sign of emotion.

Luckily, Pixar have perfected character design and earned enough of a reputation to be trusted to do something bold. Subsequently, Wall-E is extremely effective and entertaining as he patrols the deserted, destroyed planet Earth, following his programming but with some human tendencies thrown in.

It is a clever introduction and feels like one of Pixar’s many accomplished shorts but extended. Wall-E has only a tiny cockroach for company but he manages to hold the screen and be compelling just with his inquisitive nature. He is lonely but funny, sad but uplifting and delivers some great slapstick that some of the actual silent stars of earlier movie history would be proud of.

This goes even further once he is joined on the Earth by a newer, more modern robot called Eve. Thus begins a burgeoning romance as Wall-E tries to impress this new robot with his simple life and trash-discoveries. Again, there is very little dialogue but that doesn’t stop it being any more intriguing or captivating. The friendship/romance works so well considering the two characters have a handful of phrases of between them and when the plot actually kicks in and their friendship is tested, you feel for the robots as they struggle to stay together.

That plot is unfortunately the tricky aspect of Wall-E. Wall-E seems like a small idea forced into a feature length movie. The action leaves Earth and once it is aboard an Ark like ship with humans and talking-characters, the movie loses it’s charm and appeal. The story is a decent one but it seems to happen around Wall-E rather than focusing purely upon him and what started as slapstick comedy becomes bumbling annoyance.

Not that there aren’t still moments which work in the movie after the characters leave Earth. One sequence in space, with Eve and Wall-E “dancing” around the stars cements their romance in as good a way as any choreographed dance-scene would in a live action film. There are also some very good moments involving the oblivious humans, particularly the inept Captain played by Jeff Garlin.

There is also some very clear moral messages involved in Wall-E too but they feel a little too forced. Comments are made on the laziness of the human race, acceptance of all types of people (and robots) and the way we are treating the planet. They are messages well worth heeding but are delivered in a slightly heavy-handed way to be truly effective.

As always though, this is Pixar so it is a masterclass in animation. The way the movie brings space to life and manages to contrast the dusty, dirty world of Wall-E with the clean, sterile world that Eve comes from is achieved so well and keeps the studio ahead of any other trying to do the same thing.

Overall, Wall-E has a great central character that manages to hold the screen despite the lack of interaction or dialogue. Add Eve and you have a great love story that requires no words. Add a plot and the characters lose their way and the clear moral of the story over-shadows a very charming character.