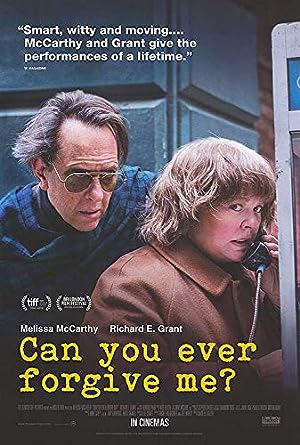 It is easy to see Can You Ever Forgive Me? as being a Melissa McCarthy “serious” performance. It could easily overshadow the whole movie had she not done such a good job of disconnecting herself from the flamboyant, larger than life characters which have made her name and embodied a person much more reserved and introverted. You could argue that McCarthy falls into the trap of playing “unfiltered, grouchy individual” which you like because they can say what you wish you could. McCarthy adds a deeper sadness to this though which wins out over the usual cliched approaches to a similar role.

McCarthy is Lee Israel, a biographer who is struggling to get published and make any money. Living on the breadline and with a sick cat to highlight her financial worries, Israel stumbles upon a fraudulent but creative way to make money which she then dives into, teetering on the edge of being discovered at all times. It is a compelling story and one with a good balance of dead-pan humour, believable drama and touching, surprisingly poignant moments.

Some of the more touching aspects of the movie come from the unusual relationship with Richard E Grant’s jobbing actor Jack Hock. He stumbles into Israel’s life and becomes her confidant. He plays an eccentric, slightly obnoxious and fairly selfish support for Israel’s schemes and although there is a charm to the relationship, it is one you can see is doomed for tragedy as quick as it begins.

The meat of the story is the downfall of Israel. McCarthy plays a woman on the edge of disaster fantastically and you are behind her all the way. With each mistake she makes and moment of revelation, Israel manages to dig herself a deeper and deeper hole, one which you want her to get out of but also wonder what the consequences of her actions will be. It plays out like a literary Breaking Bad at times, with much lower stakes but much deeper felt heartache at times.

The best of the two actors, and one of the greatest moments in the movie, comes with the final meeting between McCarthy and Grant. Grant is a funny, comedic and charming character but it is the final scenes of the movie that he manages to showcase some of the more dramatic talents that have kept him a movie mainstay for such a long time. He more than meets McCarthy in a movie which is clearly a double-header rather than a one-woman show.

Overall, Can You Ever Forgive Me? holds two great performances in an interesting story. McCarthy manages to throw-off her comedic reputation while Grant offers effective support in a dramatic role. The movie balances humour, drama, suspense and emotion well to make for a compelling movie.