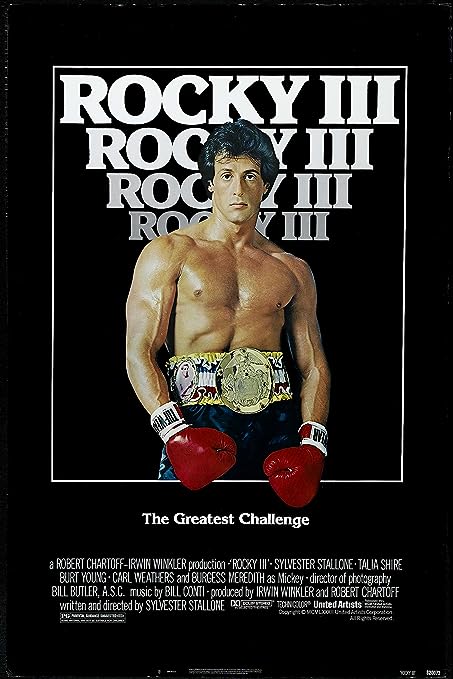 Rocky III is the quintessential Rocky movie. It is the Rocky movie that takes everything that worked in the previous two movies, all the moments that everyone loves about Rocky, and builds them-up to their biggest and boldest. It has the most iconic song, the most iconic “villain” and even features Hulk Hogan. Most importantly, but not necessarily positively, it turns Rocky from a plucky under-dog into a boxing superhero.

Each superhero needs a villain and in this case it is Clubber Lang. Mr T brings the character to life perfectly, with a mean attitude and a scowl that works perfectly against the smiley, happy life of the secure Heavyweight Champion Rocky. Mr T isn’t as well formed a character as Carl Weather’s Apollo Creed had been in the first two instalments but still manages to be compelling enough to make the central boxing matches compelling.

This film isn’t all about the boxing though and instead it is about whether Rocky is really the champion he was led to believe he was. Events in the movie bring doubt in his ability and it creates a different story in which Rocky has got to overcome new doubts and new obstacles now that he is the man on top. It means we get a new dynamic in the movie, as a mid-act match with Clubber Lang humbles our boxer and brings tragedy. It also opens the door for a new unlikely ally for our hero in the Rocky saga.

There is a Hollywood gloss that the first two Rocky movies didn’t have. They felt “indie” and low budget and it suited the more grounded story. Rocky III has clear studio backing and the expectation of doing well so feels more polished. This does alter the style and charm slightly and it doesn’t just show in the technical work of the movie. Stallone’s version of Rocky here is a more confident, heroic and unstoppable force. By the last act of the movie, the outcome is certain and it feels like you are watching a hero vanquish a villain rather than watching an under-dog boxer beat the odds.

That isn’t to say some of the classic Rocky hasn’t remained. Instead, it has been updated and polished further. Rocky III gives us the “Eye of the Tiger” theme which will become synonymous with the franchise. It is the perfect fit and gives the standard training montages here a more special feel. It rears into cheesy at times but you are never less than pumped as you watch Rocky prepare for the fight of his life.

That fight is also impressive. As the Rocky films have developed, so has the boxing and here it is at it’s best. It feels real and very brutal, especially as Clubber Lang is such a formidable opponent. Even though it is pretty clear what the outcome will be, you still find yourself on the edge of your seat as each brutal punch is exchanged.

Overall, Rocky III is the high-point of the Rocky franchise so far. It is the film that takes all the elements that made Rocky such a success and polish them up. It has a clear budget and the style has changed, introducing Rocky as a hero rather than a realistic under-dog. There is still a compelling story underneath the gloss though and the boxing has never been better.