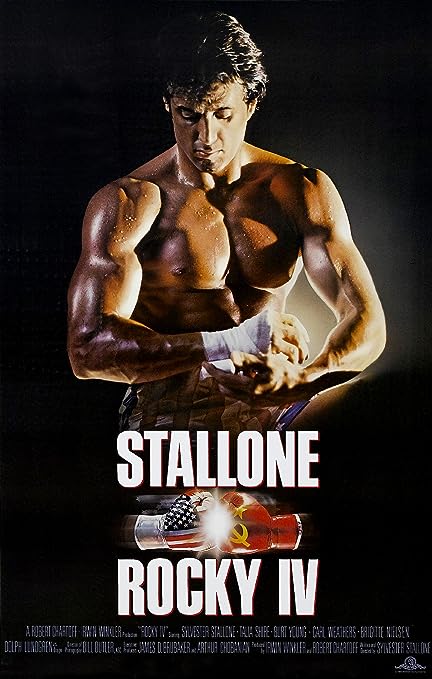 The 80s hit the Rocky franchise hard and Rocky IV was the proof. Having hit a franchise high with Rocky III, Rocky IV feels a world away and almost like an entirely different movie franchise altogether. The transformation from resilient under-dog to superhero is complete and the Rocky in this movie is a man who can scale mountains and destroy what seems to be boxing androids.

The issues aren’t apparent right away though. The movie begins almost immediately after the story of the third and Rocky is at a career high once again. The first act isn’t really about Rocky at all but instead about Carl Weather’s Apollo Creed who has been as much a franchise stalwart as Rocky himself. The initial story is about Creed wanting to prove to the world he still has the ability to fight and out-box the best. It is a story with merit and credibility and one which has some interesting dramatic aspects. It is just a shame it is wasted almost immediately.

The first issue is that this is a Rocky movie and the promising, initial story-line is just a feed to set-up Rocky’s next villain. Mr T’s Clubber Lang was as menacing and intimidating as they come but Dolph Lundgren’s Drago is almost off the pages of a comic book. He is practically an emotionless robot. He is more of a punching machine than an actual human opponent with a clear fallibility. This extends as far as the mono-syllabic and mono-toned responses Lundgren gives as the Russian heavyweight.

Once the first act has played out and the tragic consequences of the fight are clear, it is then up to Sylvester Stallone’s Rocky to deal with his indecision in the closing moments of his best friend’s fight. Again, this is a great story with plenty of potential but it struggles to break through when faced with the usual Rocky tropes.

This means that we get the rebuilding of the superhero. Faced with insurmountable odds, Rocky contemplates his career and past in the most cringe-worthy montage the 80s could offer. With a lame power-ballad and a vacant Stallone driving his sports car, key moments from past movies play out in a painful reminder of how good this series can be.

Even the actual training montage proper isn’t much better. Away from the grounded, grass-roots rundown gym and streets of Philadelphia, Rocky now trains atop a mountain in a Russian winter that is more laughable than actually inspiring. It takes the usual Rocky cliches and builds an extra level of corniness upon them. The character Stallone created as his greatest ever is now lost to an unstoppable superman who can literally run up mountains and crush anyone in his way.

Which takes us to the final boxing match. This is more like the Rocky franchise at it’s best. The boxing is as good as ever and the story told in the ring is a good one. The backdrop of the Cold War distracts slightly as events begin to unfold and the stale speech Rocky gives at the end is best forgotten but the actual boxing taking place manages to make you forget how dreadful an entry into the Rocky lore this movie is… for a little while at least.

Overall, Rocky IV is a poor imitation of what makes Rocky so successful. He is more of an unstoppable superhero than an actual under-dog boxer. The heart of the movie is gone and the best stories, with actual potential, are brushed aside for dodgy 80s power ballads and montages. The boxing is a saving grace but not enough to salvage this mess.