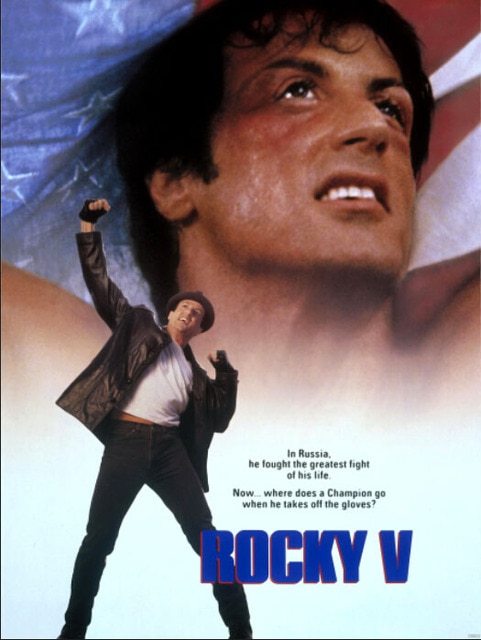 There are some great steps towards rectifying the mistakes of Rocky IV in the fifth entry to the franchise. For starters, it feels like Rocky is going back to his roots with this movie. The story manages to push Rocky out of the limelight and millionaire lifestyle and back to the same situation he was in for the strongest entries to the Rocky franchise (Rocky and II).

It begins by taking the focus away from Rocky as a boxer. The sports-star announces his retirement from the ring and that he is going into training other boxers back at Mickey’s gym. This feels a world-away from the montages, step-running and building of insurmountable opponents that the Rocky franchise had been built on so far.

Instead we get some tangible, believable story points. Rocky and his family are now struggling for money, his son is getting bullied at school but the attention of his father that he needs is being directed at a new up and coming boxer. The story feels like the drama that made the movie so accessible in the original film. Stallone is back playing a recognisable, less unstoppable version of Rocky and the story is much better for it.

You get behind this new partnership as well. Real-life professional boxer Tommy Morrison plays Tommy “Machine” Gunn and is a worthy student to Stallone’s veteran boxer. Although Morrison isn’t the best actor, he gets some decent moments and the friendship and then divide that builds between the two is believable and one you can become invested in.

The other stories previously mentioned work well too. The acting becomes a little melodramatic in places and Stallone overacts at points which can take you out of the scenes and the moments. His real-life son Sage Stallone does a good job with his sub-plot but is hurt by some dodgy 80s “teenager” stereotypes which age the movie badly.

The main plot about the boxing and the relationship between Rocky and Gunn all seem to be heading to one, inevitable conclusion. You could forgive the writers of Rocky V for trying to do something different with the finale of the movie but what they actually achieve is to add a silly moment in a strong movie. The street fight between Rocky and Gunn is laughable and completely out of character for the seasoned boxer. It stings much more when an actual boxing match would have clearly been the better and more interesting choice, with a great trainer vs student story that you could actually get behind.

Overall, Rocky V does a very good job of bringing Rocky back to it’s roots. It has some great story-lines and drama that you invest in, moving the movie away from some of the cliches the franchise suffers from. It is heavily let down by a silly ending which goes in a pointless direction when the more predictable outcome would have been so much better.