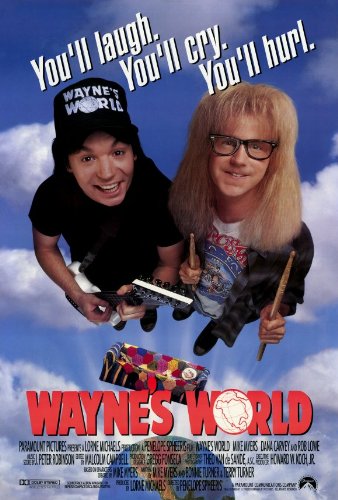 If people ask what the perfect movie comedy is then one clear answer you can give is Wayne’s World. Wayne’s World manages to follow a very clear comedy structure which ensures that it is hilarious, heartfelt and practically timeless without needing to be hugely offensive, crude or shocking. Hard to master but imitated many times before, Wayne’s World is an hilarious comedy which showcases the many funny talents of Mike Myers.

It begins with the characters. Wayne Campbell and Garth Algar are products of their time but without the irritating, over-the-top stereotype which would painfully date them. This is a movie which captures the “MTV Generation,” using the catchphrases, music and fast-paced, short attention span consumption that defined that era. Wayne is the “hero” and actively helps the audience along the story by talking directly to camera. This is used sparingly but effectively and is reserved only for him and his best friend Garth, both of which help bring this world to life and get you rooting for our protagonists.

They are also markedly different characters but equally as funny. Wayne is bold, brave, idealistic but silly enough to be charming while Garth is a romantic, dopey, shy but loyal enough to be a hero. You want to hang out with the two characters and root for them to succeed with their TV show. It is a testament to the great performances by Myers and Dana Carvey as Garth.

There is a very clear narrative, with a villain, a romantic sub-plot and very good story-arc to hang the comedy upon. It also has a fairly random element to the proceedings, with bizarre but hilarious moments, like Ed O’Neill talking to the camera with a bizarre war flashback or a fantastic scene where Wayne and Garth use clear product placement to try to disprove a point about selling-out. There is no wasted moments and every minute is squeezed for it’s comedy. It has a fantastic hit-rate for gags but even if one does miss, it is soon followed up with a quick line or clever moment which keep the laughs coming.

The comedy doesn’t date the film either. It is a product of it’s time, with a clear “type” of teenager that Wayne and Garth are supposed to be but their antics are still very funny and don’t rely on the time period to work. You could very easily see Wayne and Garth back on the screen with a YouTube channel rather than public access TV and it would still be very clever.

In fact, Wayne’s World is so timeless that it has given us some great, iconic moments. Some have lost their way but the opening with Bohemian Rhapsody changed the way a generation of people dance to a song while phrases like “Party On Garth” have a special place in a collective audience’s consciousness.

Overall, Wayne’s World is still an hilarious movie which doesn’t waste a minute delivering joke after joke and funny moment after funny moment. It has two great performances from the leads and has rightly added to pop culture with iconic scenes and great catchphrases.