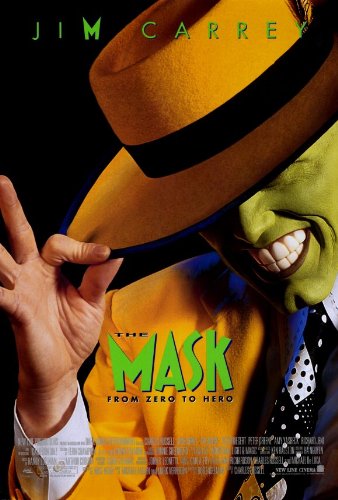 The Mask was ahead of it’s time in many ways. It was, of course, at the height of Jim Carrey’s comedic purple patch but there is more to it than that. It utilised decent CGI for the early nineties, was a comic-book movie before those were huge and could even arguably, be a super-hero movie of sorts.

It is also the perfect Jim Carrey vehicle. Once Carrey is The Mask he is allowed to unload and make use of rubber-faced talents. He throws everything at the screen, from pop-culture references through to classic cartoon character parodies. There are amazing scenes too, from an incredible dancing number featuring a very young Cameron Diaz through to a great showdown with a host of cops which manages to end in it’s own dance-number.

There is also some inventive moments when other characters get hold of the titular Mask. This works particularly effectively when the villain of the story gets hold of the powers and makes the finale a much more appealing and very cool moment. Peter Greene is a decent villain, although this is Carrey’s picture and everything else manages to support his efforts. It isn’t just when Carrey is The Mask either. The movie manages to show the softer, calmer side to the Hollywood megastar when he isn’t The Mask. It helps you get on-board with Stanley Ipkiss, making his transformation mean so much more and also highlights some fantastic scenes which can be as funny as anything when Carrey is wearing The Mask.

As original and funny as this movie is though, it doesn’t hide the fact that there is little of substance here. The story is very basic and very silly in places. The plot is poor and doesn’t quite hold-up enough to make this a classic. Carrey sparkles but the film hasn’t aged well and his movies since have shown that he is better than this material allows him to be, even if he is allowed to let-loose and show some of his more classic talents.

Overall, The Mask is a very funny vehicle for Carrey and shows what he can do best. The CGI and effects are impressive considering it’s age and there are some original, inventively comedic moments but the movie has aged poorly, with a paper-thin plot and not enough for Carrey to really work with effectively.