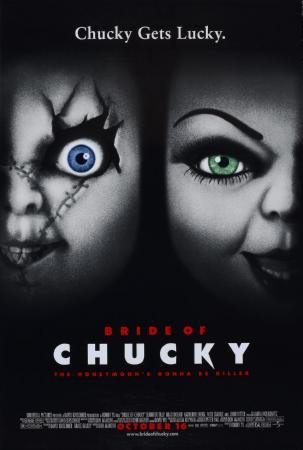 The fact that this film is no longer called Child’s Play should give you some idea of how loosely linked to the original series it is. In fact, it begins fairly weirdly with the focus set purely on Jennifer Tilly’s Tiffany, a disturbed woman who has ties to the serial killer Chucky who inhabits the iconic doll.

Jennifer Tilly is by far the best thing in this movie. She is an underrated actress who clearly revels in this role, playing it for the comedy it requires while leaning into the violent, gory kills that have become a staple of the franchise. Tilly is very funny. She is understands how to sell the black comedy and once she becomes a toy doll herself, brings the plastic to life as well as Brad Dourif does.

Dourif returns to embody Chucky as well as he ever has. His chemistry with Tilly is clear and they make a good double act; arguing and bickering as the title would suggest. It adds a different element to this series, away from the killer doll attempting to possess a child and now a road trip, with multiple, inventive murders along the way.

Comedy has replaced horror here though. You are watching as Chucky and Tiffany avoid getting caught, bicker while slashing and murdering and deliver one-liners as the final breaths leave their victims. It gives the film a distinct B-Movie feel and the inventive charm that the original trilogy had is now long gone. This is a film for people who are fans of Chucky as a character, not for the Child’s Play horror series.

It also doesn’t help that the acting is awful. Dourif is good as Chucky and Tilly does an excellent job with Tiffany but an early role for Katherine Heigl and a bit part for John Ritter do not see these actors giving their best work. You could argue they matched their performance with the material though.

As with most horror franchises that go on slightly too long, Bride of Chucky has a bizarre ending which offers the potential for a sequel. Unfortunately, in this iteration and this far away from what made Child’s Play so great, I can’t imagine anyone would want to see it.

Overall, Bride of Chucky has a great performance from Jennifer Tilly, who understands how to play to this sort of film while Brad Dourif returns to a role he is clearly comfortable in. This is not a Child’s Play movie though and lacks the creativity that the earlier films had in spades.