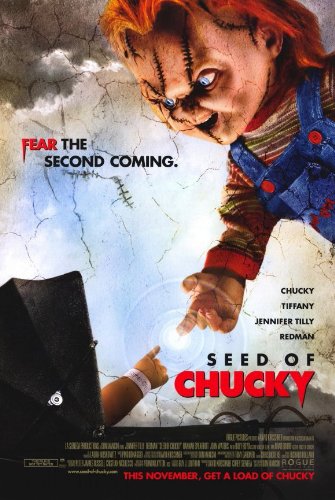 By the time that Seed of Chucky, the fifth entry in the Child’s Play series, arrives the franchise has lost all sense of what it actually was. This is a series that has decided to go full comedy, using black humour to entertain rather than horror to scare. Unfortunately, what good ideas the movie does have are wasted and the film, if it is trying to be a comedy, is just not that funny.

By now everyone knows what Chucky is about; a killer doll who swears, quips after kills and has a dysfunctional marriage with another possessed doll. This is not about him being a toy at all, in fact that aspect seems to be forgotten and people don’t even pretend like this is the same character from Child’s Play. Brad Dourif returns to voice the character, and does a decent job, but this is a series which doesn’t have a clue where its roots are.

As the title suggests, this movie introduces the child of Chucky and Jennifer Tilly’s Tiffany which was briefly glimpsed at the end of the last movie. In a decent twist, this doll, named Glen or Glenda depending on which parent is interacting with it, is having a crisis of identity and doesn’t know if it wants to be a killer like it’s parents. This leads to some clever moments, where the two original dolls take their child on some interesting murdering escapades to try to convince him to join their “cause.”

This is also a movie that is trying to be “meta.” Jennifer Tilly plays herself, making a film about the killer dolls. Horror movies set on the production of the movie they are creating is no where near a new idea and Seed of Chucky does this very poorly compared with the likes of New Nightmare or Scream 3. The “meta” aspects don’t work, the film is not as cleverly written as it would need to be for these aspects to be effective so it becomes a muddled mess.

Aside from the odd moments which shows there is a very good idea at the core of this mess, Seed of Chucky is an uninspiring “horror” movie. Chucky is not as funny or scary as he used to be, Tiffany is becoming annoying and their child is a muddled mess which could have been a clever comment on identity but just comes off as offensive. Bride of Chucky felt too “B-Movie” but this doesn’t even qualify for that status.

Overall, Seed of Chucky is so far removed from what makes Child’s Play an effective franchise that you’d be forgiven for believing this was a poor rip-off. Chucky is not funny or scary, Tiffany has lost her edge and the few moments of genuine inspiration are wasted for something too generic.