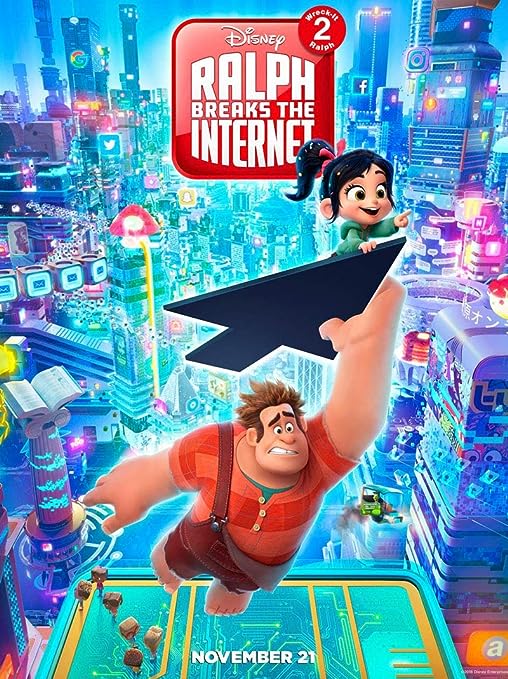 Ralph Breaks the Internet is a very clever movie. In the same way that Wreck-It Ralph managed to lampoon and parody a host of famous video-games, while highlighting and spoofing the many tropes that many gamers will recognise, the sequel manages to do exactly the same for the internet. The fact that the studio behind this movie are Disney doesn’t hurt as there can be plenty of sight gags to go alongside the more overt comedy, from pop-up ads enticing Ralph through to invading many a famous website in an attempt to collect “likes.” Add to this some iconic Disney icons, from Marvel through to the Disney Princesses, and you have a take on the internet like nothing else.

All of this is redundant without a good story and luckily there is a key plot which manages to make Ralph and Vanellope entering the internet a logical next step. Of course, like the moral about being yourself and accepting who you are from the first, this becomes a story about friendship and growth, and letting the important people in your life follow their dreams. This is as heavy-handed as the first movie’s but when a film is aimed at the younger audiences, it can be forgiven.

It also helps that the characters are a joy to watch. John C Reilly brings Ralph to life in his love-able but clumsy way while Sarah Silverman steals the movie as Vanellope once again. The film lacks the recognisable video-game character cameos from the first but makes up for this with the best use of Disney Princesses yet. Although the trailer gave away the best moments, it feels like a rare moments of self-awareness from Disney, willing to highlight faults in one of their biggest money-makers. They also manage to get a decent role in the overall plot to extend their impact beyond a comedy aside.

As with the first, there are some decent original characters too, from the “Google-esque” Yess, brought to life by Taraji P Henson as well as a key character from what seems to be a GTA-alike game, for example Felony played by Ali Wong. The world is well realised as it was with the first and develops the overall story well.

As clever as the movie initially feels though, it lacks some of the creative spark of the first. The gags come thick and fast when the pair first enter the internet but the jokes soon dry-up once that initial novelty has worn off. The same can be said of the plot, which doesn’t have the depth required to hold attention to the end, and becomes a fairly predictable and mundane story by the finale.

Overall, Ralph Breaks the Internet is a very clever, self-aware take on the internet which manages to develop and build the world of Wreck-It Ralph well. It has some great use of key characters and recognisable properties but struggles to maintain the jokes and the plot until the end of the movie.