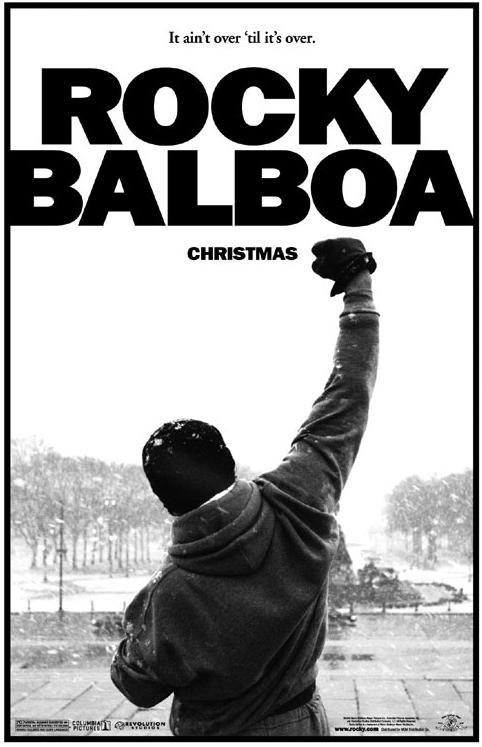 There is a reason people buy Greatest Hits albums. That heavy dose of nostalgia, the fact you have all the best moments from your favourite band in one single, accessible place and a clear way to recognise and celebrate the achievements of something you love. Rocky Balboa is the Greatest Hits of the Rocky franchise.

For you to be able to fully enjoy Rocky Balboa for what it is, you have to be able to look past the ridiculousness of the central premise. Rocky, now way past his prime and “enjoying” retirement is challenged to a fight with the current heavyweight boxing champion after a video-game simulation puts doubt in who would actually win if the two faced in “real-life.” It wouldn’t actually happen, it would be laughed out of the building but for the purpose of this movie it works and is the only moment when you have to suspend your disbelief.

That is because apart from a a few wrinkles and skin that doesn’t look quite as taut as before, Stallone looks the part completely. He looks amazing for his age and manages to make the idea that he could go up against the younger, more agile fighter plausible. Rocky is always better when he is the underdog and age is the defining factor here, placing him clearly against the odds which is where the audience love him to be.

The best of the Rocky movies were not just boxing films though. The original Rocky was about beating the odds and getting one last chance, not just in sport but in life. Although the franchise lost its way, Rocky Balboa brings a decent plot to the forefront here. Rocky is struggling with age, feeling alone and without a place in the world. His relationship with his son is strained and he clearly needs something to ignite that passion. This is Stallone giving a masterclass, not just in boxing but also drama, as he manages to bring the vulnerability back to Rocky after the last couple of films lacked that vital side to the character.

Of course, it is also clear that this will be the last “Rocky” movie so it is the last chance to go through the best moments of what made this franchise such a popular one. The montages are back and better than ever, with Stallone managing to offer subtle nods and clever touches so that the past is acknowledged without ever being fully repeated. It is a homage to the best of Rocky but manages to bring something slightly fresh too.

As for the boxing, arguably it could be the best of the series. There is a gritty, raw style to the way the boxing is presented here. It feels much more like a documentary in the way it presents the fight than the more cinematic way that the previous movies would have done so. The fighters don’t hold back and it is testament to the two actors in the ring that the fight feels real as you watch it.

I won’t spoil the outcome of the fight here but it is in keeping with the rest of the movie and the over-arching nostalgia that this movie offers. Rocky Balboa is pure Rocky and is one of the best movies in the franchise because of that.

Overall, Rocky Balboa takes a look at the iconic past of the franchise and creates a suitable greatest hits of the best moments that made this the vital sports franchise. Stallone is never better, the boxing is fantastic and the movie feels relevant regardless of the silly premise at its core.