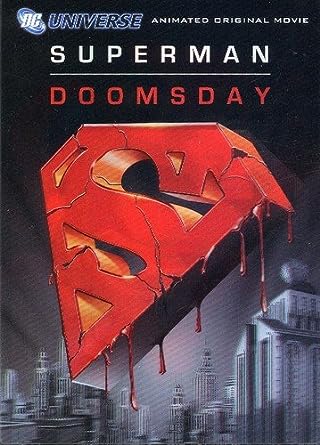 The “Death of Superman” is one of the biggest events in comic history. It was a huge moment which spanned various comic-book titles, introduced new characters and gave us a key story which is ripe to be adapted for the big screen. Zach Snyder tried to do a version of it with Batman V Superman however it never really captured how good a story this really is. The DC Animated movie, Superman: Doomsday, does a much better job. This is mainly because it sticks so closely to the very good source material.

The animated movies that DC produce don’t rely on world or universe building and trust that the audience has some sort of prior knowledge of the character they are watching. This makes perfect sense with such an iconic character such as Superman and means that time can be spent building the story properly. So early doors we get the heroic Superman we expect, the intrepid reporter Lois Lane and the ever present menace of Lex Luthor. There are no strange versions of the characters here and the movie is all the better for delivering the characters as people remember them.

Once the protagonist, the Doomsday monster, finally does arrive, the movie kicks into gear and the action hits with plenty of punch. The animation isn’t anything to write home about but it is all very good at capturing the story and the dramatic moments which make the “Death of Superman” story such a good one to tell in the first place.

It would be wrong to give too much away but the “death” occurs early and the strength in the story is what happens once the monster has been vanquished and the world has to cope without a Superman. The film doesn’t shy away from a fairly dark tone and the actions of the person who appears to “replace” Superman are all the more effective for how dark they are. This is a cartoon but it isn’t for the tiny ones.

As effective and strong a version of the “Death of Superman” story that this film is, it still doesn’t feel anything more than an extended version of a Superman: Animated Series episode. You’ll never be bored but it is very throwaway. What it does showcase is how much freedom DC have when they use their characters in a sensible and recognisable way and don’t feel the need to change things too radically.

Overall, Superman: Doomsday is a strong animated story for the iconic superhero. It presents the famous “Death of Superman” story well and makes clever tweaks to keep it workable for a single-shot animated movie. It is dark at times which elevates the stakes but won’t linger too long in the memory once the credits have rolled.