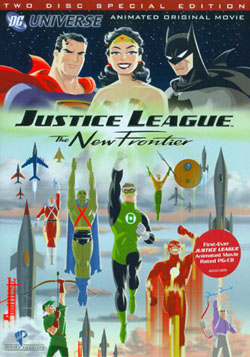 If there was ever a case for DC having a wealth of worthy material that they could take their stories from, it would be an animated movie like New Frontier. Not held by the restrictions of a big budget, tent-pole summer blockbuster, the animated output from DC means that they have freedom to explore some of the lesser characters and tell some ambitious stories. New Frontier does this perfectly.

It is a bold story which involves a lot of the classic DC characters, like Superman and Batman, as well as some of the more minor characters like Martian Manhunter or Rick Flagg. In some respects, this is a film which belongs much more to the lesser characters who make up the DC Universe. Unlike what the cinematic universe has managed to do, New Frontier has the chance to take it’s time and give proper introductions and even some origin stories to some of the supporting characters in the DC Universe.

This is all within a decent story involving a cult taking over major cities around the world in the 1950s. The setting means we get the “big three” DC superheroes as endorsed government heroes (not unlike the issues that caused the conflict in Civil War) but a chance for other heroes to come out of the shadows and take their place in what will eventually become the Justice League.

This isn’t treated as too silly either. It is a story with plenty of maturer moments too and some great action. You do wonder what this sort of action would look like in a live-action setting but it is notable that New Frontier feels more for an older audience than being aimed at the Saturday morning cartoon crowd.

This does lead to some moments which jar slightly though. There are times when things get a little too silly and you are pulled back into the world of the “animated universe” and the more kid-friendly aspects. It is also a story which could benefit from a little more development. This is a world with plenty of potential and some fantastic back-story but it is crammed too tight into the short run-time that usually goes with these animated movies.

The villain is lacking too. There is a fantastic threat looming over the whole movie but unfortunately it never reaches it’s full potential and when the threat is finally revealed, it is very disappointing. It does a good job of bringing the heroes together for a big, action finale but never really does the rest of the movie justice.

Overall, New Frontier is a good showcase of what potential DC has if it trusts it’s plentiful source material. It shines an effective spotlight on the lesser known characters in the DC Universe and offers a good origin story but a rushed execution and a poor villain let it down.