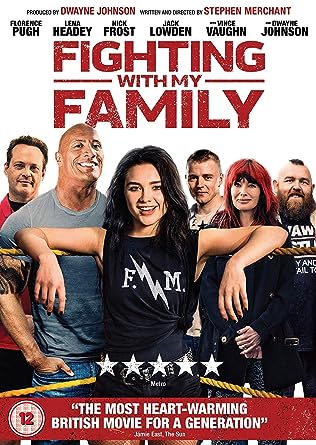 For something so intrinsically American as WWE and Pro Wrestling, Fighting with my Family has a fantastic British charm which stops this becoming the ultra-cheesy underdog story we have seen a thousand times before. Many will be put off by it’s ties to “Sports Entertainment” and the half naked men throwing themselves around a ring but if you can look past that, there is a truly remarkable and very well-told true story here.

It helps that the story begins in a deprived area of England and ends in the flashy lights of WWE. It gives the story a great authenticity and in some cases a slightly raw and grimy feel. It certainly doesn’t shine with the WWE gloss or the Hollywood sheen that you would expect from this sort of story. The parts of the movie set in England, specifically Norwich, are the highlights, offering the best comedy moments.

It helps that the cast for this part are some great British talent, from Nick Frost, through to Lena Heady and a brief but impactful cameo from director Stephen Merchant. It is a good British mix of dry humour and slapstick that gives it a distinct identity and feel from other under-dog sports stories.

This is in part down to the two leads, Florence Pugh as the main character Paige and Jack Lowden as her brother Zak, who has a lesser story in the movie but one which packs as much of an emotional punch at points. The two balance the drama and comedy well and Pugh is particular impressive when it comes to the in-ring elements of the story.

As “fake” as people believe wrestling is, Fighting with my Family takes an in-depth look at the behind the scenes elements of the industry. From the low-budget independent British circuit through to the bright lights and multi-million dollar WWE industry, introduced with the “training centre.” Those who doubt the credibility of Professional Wrestling may see the industry with a different light once they see how the training is portrayed here.

It also does a good job of demonstrating how female wrestling has developed in WWE and the wider industry. Paige was at the forefront of this and it is to the credit of WWE that they allow the glaring issues facing this aspect of their company to be placed under such a huge spotlight. It is a testament to how much they trust Merchant and the story he is trying to tell.

As genuine as the overall story is and as well told as it is, with the authentic aspects, you can’t quite get past the feeling that this is “Rocky with Wrestling” as it does follow the usual under-dog story beats. There is even a standard training montage to really hammer home Paige’s progress.

This also means that at times it lends itself to some of the more cheesy aspects. This often comes with a dose of Dwayne Johnson, returning as The Rock. He is nothing more than a glorified cameo and a marketing ploy but also manages to make his particular aspects of the story the least believable when he is on-screen.

Overall, Fighting with my Family is a surprise Hollywood product which is British through and through. The glitz and shine give you the impression of a hugely studio-tampered product which actually has some of the independent spirit that the best of British has produced. This is fitting as it reflects the excellent story of Paige and manages to offer heartfelt moments, genuine drama and plenty of comedy, even if it borders on the cheesy side more often than it should.