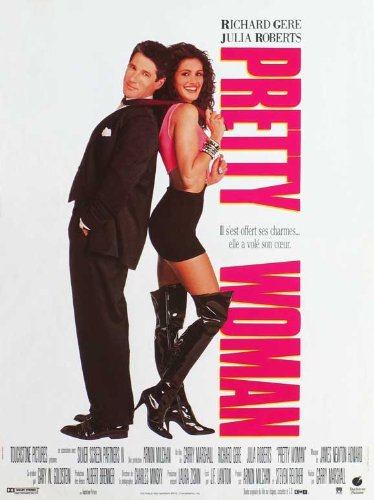 You can’t help but notice how impressive an actress Julia Roberts is from the first moments she appears on-screen in Pretty Woman. Considering this is fairly early in her career, she has a charm and likeability which carries a fairly dull and directionless movie across the finish line with some good will.

A lot of this comes from her ability to lighten the room with her infectious smile and highlight the absurdity of any of the countless situations she finds herself in. Pretty Woman is a “fish-out-of-water” classic, with Robert’s street hooker being dropped into the high society life. The humour never feels at her expense though but instead at the expense of all around her, as she sees the ridiculousness of her situation and how to play it to her advantage, usually coming out on top in every instance.

This is in complete juxtaposition to Richard Gere as the rich millionaire who “employs” her for the week to be his escort and date to each function. Gere lacks any sort of charisma, chemistry or presence in the scenes other than to be a smarmy creep. The whole movie is hung on the fact he has paid Robert’s character to sleep with him and then hang around and it never really feels right. It doesn’t even convince that these two should be together in the end either, as Gere never does anything to really endear the audience.

This was the product of the 80s, just creeping into the 90s, so this kind of “hero” is overlooked as suave rather than as a creep. The decade is also really clear from the fashion and the soundtrack but also the way that some of the potentially darker elements are breezed over. Robert’s profession is glorified in some ways or at least never really scrutinised for how dangerous her “job” really is. The same can be said for “villain” of the film which touches upon the preconception of prostitution but never really delves into this in an effective way.

Instead this is a light and breezy movie which lacks any required depth. The film is predictable, shallow and goes in exactly the direction you think it will. There is little drama or conflict and everyone’s lives are fine by the end. It is funny though and you can’t help but get wrapped up in the story because of how good Roberts is.

Overall, Pretty Woman is a victim of the time period. It is a shallow story about a prostitute being “saved” but never actually confronts or delves into any of the story points it touches upon. Roberts saves the film with some funny, charming and fantastic acting the manages to counterpoint the dull Richard Gere.