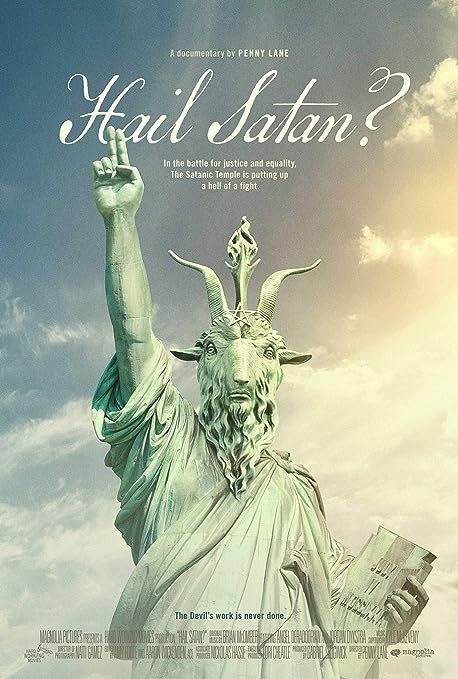 What could have been an in-depth, sympathetic look at what the seemingly misunderstood religion of Satanism really stands for is instead portrayed as a sensationalist documentary which doesn’t ever get truly to the bottom of what people involved in Satanism really believe. This seems ridiculous considering how much access the documentary makers have to those involved in one aspect of the movement at the very least.

This is a very close examination of the people involved in Satanism. It has plenty of talking heads, interviews and footage of the daily work and routines of the people leading and involved in the religion. This varies from speeches at rallies through to access to the headquarters of the key leaders. There is no stone left uncovered here and it makes for a very interesting expose on the movement.

This is, at first glance, a very political movie. The film focuses particularly on the struggles with freedom of speech that the Satanist movement has faced. This is presented fairly evenly, with coverage of Satanists trying to get a statue placed outside a Government building alongside a Christian one. The reasoning is clear and at times you even find yourself agreeing and sympathising with what the Satanists are trying to do. There is a clear, very well-structured story here.

Unfortunately, the film can’t stray away from the more radical sides of some of the Satanist practices and beliefs. There are reenactments and even actual footage from “ceremonies” and “rituals” which involve blood, masks and nudity which almost under-cuts everything the beginning of the movie tries to present. It plays into the cliche and stereotype that this film seems to be trying to dissolve.

It is also structured in a backwards, misleading way. The negative aspects, which are mostly conjecture and according to the people involved, the minority, are depicted in detail before “The Commandments” of Satanism are unveiled, which presents a very different view of what this religion really stands for and what it’s teachings are based upon.

There was a chance for this film to be one exposing the hypocrisy of American politics and religion, of the misunderstanding of a fairly new religion and how it would chime with a lot of people. Instead, the movie has gone for a look at the practices, the shaming of key members and sometimes feels like a chance to look at the bizarre rather than empathise with those that may have shared a lot of people’s key beliefs.

Overall, Hail Satan? is a missed opportunity which exposes the filmmakers as being more interested in the sensational rather than the reality of what this movement are. There are some great political points, some in-depth interviews and access which makes the movie worth a watch but do so with an open-mind.