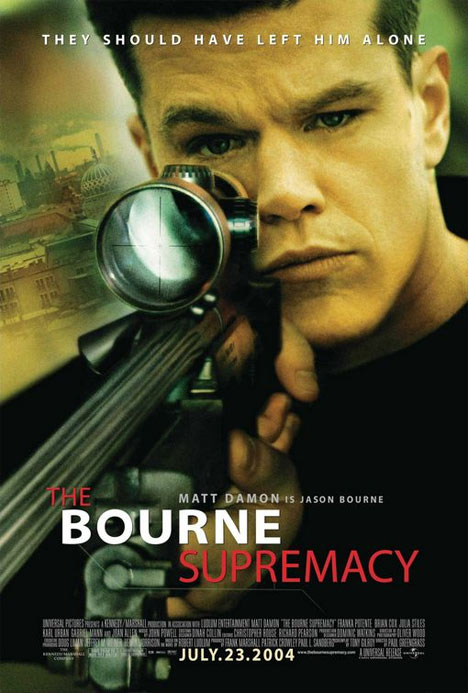 I hate unnecessary sequels. I hate the idea that for nothing more than money, a film has been forced out of a story that had essentially finished. I have ranted about this before but I never would have included The Bourne Supremacy in that list.

My initial impression of the Bourne series, before seeing it, was that it followed the character of Jason Bourne as he struggled to find out who he was and bring down the people who had brainwashed and betrayed him. That isn’t true! It wants you to think that is what it is about but on closer inspection, the second film doesn’t really follow the first at all.

The characters are the same and there are some general links back to the previous film but this didn’t actually have to be a Bourne film. It could have very easily been about any spy or government agent that has been framed for murder and then chased by the people who wrongly believe him guilty. As I realised how loosely linked to the previous film this was, the more agitated I got about the whole thing.

Especially because this film isn’t made anywhere near as well as the first. Paul Greengrass is often lauded for his use of shaky-cam and his gritty action but I hated it. The fight scene between Bourne and another agent was so shaky that I couldn’t work out what was going on! It had lost the cool, choreographed, slick fight scenes that were a huge positive from the first film and replaced with some sea-sick inducing mess.

You could even see the desperation to repeat some of the previous successes of The Bourne Identity. The car chase that was a brilliant part of the first film is repeated almost exactly the same here but more incredible and unbelievable. The Mini chase in first film stretched reality but never lost its realistic feel. The fourth or fifth time Bourne’s taxi his hit and he isn’t suffering from whiplash or the car doesn’t roll or just pack-up altogether, we start to stray into the territory that made Bond so stale. Especially because the way he kills the villain is with exactly the same method that he seems invincible too.

It’s a shame because the actual story is a really good one. A betrayed agent, a murder mystery and conspiracy within the CIA. It’s a shame they feel to need to force Jason Bourne into the film and then have to adapt the story to fit a sequel. This would have worked a lot better as a stand-alone film and has been bettered since by Liam Neeson and Unknown.

What is more worrying is that this film ends too. The story is over. Nobody is chasing Bourne, the same way nobody was chasing him after the first film, which means for a sequel to work, they will have to pigeon hole him into another film, get another shady government group to chase him and then have him face off against another assassin. I haven’t seen the Bourne Ultimatum yet but I bet I’m not far off.

Overall, I was really disappointed with The Bourne Supremacy because it’s clearly an unecessary and unneeded sequel. It forces Bourne into a story that would have suited new characters and a whole new film, rather than trying to create a sequel for a story that had already finished. The film tries too hard to be more realistic with shaky-cam and an all too ridiculous car chase that never equals the first, let alone betters it.

One thought on “The Bourne Supremacy (2004) Review”