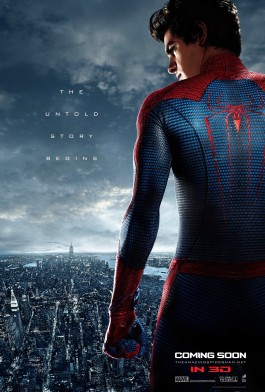 What if Sam Raimi hadn’t made his Spiderman trilogy? Would people treat Marc Webb’s reboot with the disdain and disregard? People were too quick to dismiss the movie because it was so soon after Raini’s disastrous Spiderman 3 but what did people expect? Imagine trying to follow Batman and Robin with another Batman movie in the same franchise. It wasn’t as bad as bat-nipples but Peter Parker dancing in the street with a haircut that made him look like one of My Chemical Romance wasn’t far off.

It was inevitable, with all the money, popularity and strength in the character, that another Spiderman movie was going to be made. The studio made the correct decision in starting from scratch and what we get is a film that perfectly catches the superhero it is based on almost better than any superhero movie before it. We finally get a Spiderman that is wise-cracking, moves realistically and acts like a gymnast on speed.

Even better, we get a Peter Parker that is truly dorky, tormented by his geekiness and intelligence and reborn as the superhero that will also make his world come crashing around him. In fact, that is the one major issue I have with this movie. I wish Webb had just bit the bullet and acted as if Raimi’s franchise hadn’t existed. I hate that Uncle Ben almost says “With Great Power comes Great Responsibility” but decides to over-explain the famous and integral phrase. It annoys me that they have had to change the wrestling aspect of Spiderman’s origin when its such an obvious use of his powers and key part of the story. They both irritate me so much because the rest captures the Spiderman from the comics so perfectly.

My last review gave this movie a score of 9.9. Looking back that was a little high but it still deserves a fantastic score. The action is amazing and I still love the use of first-person Spiderman. The big set-piece at the end, although not delivering on its promise of a “Lizard Army,” does build to a fitting climax and enough of a satisfying, action-movie resolution.

What’s more, the seeds have been sown for great franchise potential. A new Spiderman means new versions of Green Goblin, Doctor Octopus and most exciting of all, Venom! It means that these characters can be done properly and reflect the amazing comic book versions that inspired the movies in the first place.

Overall, I still love The Amazing Spiderman. It perfectly captures the Spiderman from the comics and delivers the closest version of the comic-book hero that we will ever see on the big screen. The characters are cast brilliantly, the action is intense and exciting and best of all, the story has potential for a great franchise. Add some of the better villains and a certain red-head and we could have the perfect Spiderman trilogy at last.