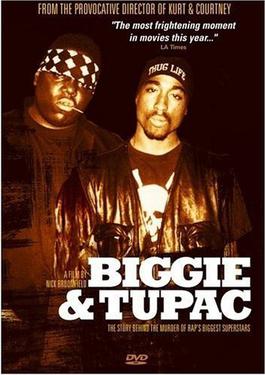 Biggie and Tupac could be one of the messiest, most disorganised documentaries ever made. As you watch director and presenter Nick Broomfield run from location to location, get shunned in countless meetings and interview questionable “sources” you have to question his overall aim of the documentary.

It starts strongly, outlining the initial story of the two iconic rappers, Tupac Shakur and Notorious BIG. For any rap fan, the story won’t be new or offer anything you won’t already know but there is footage which offers a glimpse at their early, doomed friendship. Unfortunately, this is also when the cracks begin to show.

Broomfield seems to have plenty of home footage of Tupac but very few people connected to his life will talk to the director. His Mother, Afeni Shakur, won’t even let Broomfield use his music so the only Tupac material is from a dodgy recording which is apparently worth $2-3 million! This is just the first example of what feels like ill-prepared and ill-researched interviews with people who “may” have known the two subjects of the movie. At one point Broomfield is walking into a barbershop asking the patrons if anyone knew Biggie Smalls or crossing the road to ask questions of a man who knew the rapper when he packed bags. Hardly hard-hitting journalism which will lead to the true story behind their killings.

That is the main story here. Biggie and Tupac is supposed to uncover the story behind who killed the two rappers. This is an interesting story and when Broomfield gives the background to the feud and footage from the night Tupac died, you are sucked into the conspiracy. Unfortunately, what follows is many interviews with witnesses and people directly involved in both killings which reveal very little.

The documentary was created in 2001/2002 which is only five years after the two rappers deaths. This means that people are still scared to talk, involved in on-going cases or just against the idea of being a “snitch.” One interviewee had guard dogs and refused to admit to quotes in his own autobiography. It shows the real power of the people who may have been involved but doesn’t really open up the case in any real way.

Even when Broomfield is making progress, the way he has presented, edited and constructed the movie makes little sense. It is back and forth between interviews and witnesses, making it difficult to keep track of which suspect, trail or thread that the movie is following next. There seems to be at least one breakthrough moment and a very interesting interview which reveals the LA Police’s negligence or corruption but by that point it is difficult to really understand what has been discovered.

To Broomfield’s credit, there are two notable interviewees which lend the movie it’s sorely needed credibility. The film uses the exclusive contact with Biggie Smalls Mother, Voletta Wallace, as much as it possibly can. This means we get some great insight into his earlier life and it is clear that without Voletta, Broomfield wouldn’t have gotten half the interviews he did, but for facts about the case, she is of course very sparse on any useful information.

The film ends with an exclusive interview with main suspect Suge Knight. The film would have been much better if it had been about his control of the rap industry and why he still instils fear in people, even from behind bars. When the interview with the holy grail of the movie finally begins, it is clear that Knight will not offer anything of any use and again, the interview seems cold, disconnected and ultimately useless.

Overall, Biggie and Tupac is an example of why a documentary needs both a clear aim, direction and most notably of all, clear evidence. Nick Broomfield lacks all of these, with bewildered interviewees, very sparse information and no concrete lead on the actual cases he is investigating and hoping to crack. The two best interview subjects are very impressive but for substance, offer very little, as does the documentary as a whole.