Renee Zellweger has had one of those rare careers where she is well-known but has only seemed to have one stellar role. She seems to have broken Hollywood with one key character and then stayed around the industry, surviving with key supportive roles. It is very telling that after what feels like a long time away from the spotlight, Zellweger is returning to the central role which made her famous for a third time. 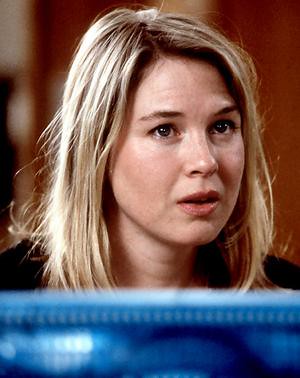 This seems too obvious but unfortunately, when examining the career of Renee Zellweger, there isn’t much that stands out and shows her acting potential. After a lot of supporting roles early in her career, including movie-star time capsule Dazed and Confused, Zellweger seemed to jump to prominence in Jerry Maguire.

This role will always prove memorable for Zellweger because of that scene and that line. It is hardly her greatest performance though and it would be hard to shine in a Tom Cruise vehicle.

This would be the same problem for her next biggest role, starring alongside Jim Carrey in Me, Myself and Irene. Again, she wasn’t much more than a love interest in this role and it is difficult to steal a spotlight from biggest comedy star at the time.

It wouldn’t take long for her to get her own starring role which would show her comedy skills properly and Zellweger does shine in Bridget Jones’ Diary. She shows that she can be likable, funny and appealing, all while doing a perfect English accent. It is a star-making role and one that she would use to catapult herself into other films, although none quite as successful as Bridget Jones.

Chicago would see her showcase her ability in a musical, Down with Love would be a poor period romantic comedy while Cold Mountain would be a classic Oscar win for a forgettable film and a role which many would forget. It made perfect sense that the actress returned to the role which made her famous.

Bridget Jones: Edge of Reason wouldn’t compare to the original though and many saw it as a cheap rehash of the old, popular jokes from the first movie. It would also see a return to Zellweger back to supporting roles to bigger stars, from Russell Crowe in Cinderella Man or George Clooney in Leatherheads. Whenever Zellweger would take the lead, the movies were forgettable, simple comedies, such as New in Town or My One and Only.

That is why, unsurprisingly, Zellweger is returning to Bridget Jones again. The trailer for the film shows a different kind of story for the character but you can’t help but feel like it a step backwards for an actress which has shown great potential but never seemed to get herself the huge starring role which other actresses used to launch an ultra-successful career.

Overall, Renee Zellweger’s return to Bridget Jones is very apt considering her first movie in this role is her career peak. She has never been as successful in the starring role, always seeming to support in bigger movies, to bigger stars or lead movies which don’t resonate or are just simply forgotten.

3 thoughts on “What is their Career Peak? – Renee Zellweger”