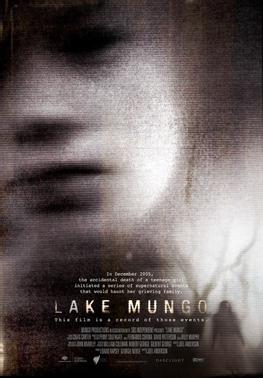 There is an unusual, excellent movie in Lake Mungo, however it is hidden underneath some confused story-telling and weird, muddled narrative. The ideas that Lake Mungo want to express are clearly original, directly from the documentary style opening which demonstrates that people believe spirits are hidden in pictures and photographs. It signposts the story but in an effective creepy way. Those looking for a conventional horror movie will be sorely disappointed though.

For a lot of Lake Mungo, what you are watching is a fictional story about a family’s grief but played as authentically as possible. The convention of using a documentary format, with pre-recorded footage, talking-head interviews and reconstructions, all heighten the realism of what this family is going through. This is, at it’s core, a story about a family coping with the death of their daughter/sister.

It is in how the family are coping that the creepy element begins to show. The family are convinced that their daughter, Alice, played by Talia Zucker, is still haunting them and that her image is being captured in their home and in the location where she died. This then sets in a Paranormal Activity style attempt at capturing the “ghost” during the night, with cameras left running and photographs picking up strange images.

This has been done many times before but the realism with which the family react to the footage and the supposed findings is what adds the creepy feel to the whole movie. If the film had continued down this route, it could well have been a solid, if somewhat generic horror. Instead, the writers almost attempt to be too clever and begin to layer on reveal after reveal, twist after twist.

There is nothing wrong with that if these are logical, developed and add something to the overall story. Within Lake Mungo, each new reveal and twist adds to confusion in the story and the audience will be left wondering where the movie is supposed to be taking them. Moments make little sense, some reveals don’t lead anywhere while others are excellent but need more time to be fully explored.

That is until the titular location comes into the movie. Lake Mungo isn’t featured until the third act but when it is, one of the creepier moments in any movie is shown and a central idea which is sorely in need of development is also demonstrated. A reveal of the camera footage on deceased Alice’s phone will send a chill down anyone’s spine but by this point is left far too late and far too many other, unnecessary moments have gone before it.

There is also a great credits sequence which also sends shivers. It is easy to see why it was left to the credits for these moments but if they had been placed in the actual movie maybe this would have achieved the sense of horror that the creators of Lake Mungo were looking for.

Overall, Lake Mungo is a movie with excellent ideas but poor execution. It struggles to know what it is trying to achieve. Does it want to be a horror movie? Is it a documentary about grief? Is it just trying to unsettle? This lack of direction means a lack of coherence and a muddled final product. A shame because there are some excellent moments and one great idea hidden beneath the confusion.