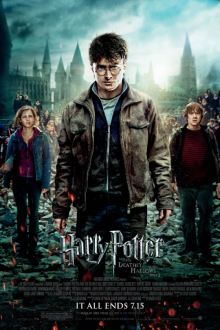 Where Part 1 of the Deathly Hallows story was definitely designed to set the scene and place all the pieces of the tale in place, Part 2 is the finale. To say that this movie is one large set-piece may be simplifying things slightly but you can’t help think that a lot of action was put in place over substance. Not that this makes for a bad movie, just one which feels slightly lacking.

Not that there isn’t any story-telling here, it is just lodged between a lot of action sequences, generic magic-wand battles and stand-off after stand-off. It is a bold move because the first film set-up so much to be resolved, from the destruction of the remaining Horcruxes, the location of The Deathly Hallows and the fight for Hogwarts itself.

This final battle is the main crux of the movie, taking up at least the final two-acts. It is very impressive though. The spectacle doesn’t fail here, as wand battles, large snakes, explosions and giants all grace the screen in a bust-up that would rival moments in Lord of the Rings and Game of Thrones. The issue becomes when any attempt at story-telling takes place in-between.

This leads to some very confusing moments within the franchise’s finale. The story of Snape and his actions is “explained” but so quickly that questions are still unanswered, as is a bizarre moment in a “white King’s Cross Station” which lacks any clarity at all. There is so much to cram into this movie that even two separate parts still doesn’t feel like enough.

Luckily, this is soon forgotten when some of the cooler moments occur. Characters you have watched develop and grow as the series progresses get a chance to show their muscle here and it feels very satisfying. From Maggie Smith, through to Mark Williams and even Julie Walters, each long-standing character gets a moment or conclusion which they deserve. This also includes the best character of the movie, Matthew Lewis as Neville Longbottom, who has never been more bad-ass than he is here.

It is the story of Harry Potter and Voldemort though and that doesn’t disappoint. Although moments in their story and the scenes leading up to the final battle can often be slightly bizarre and without clear sense, the finale lives-up to the eight movie build. Ralph Fiennes is as scary, chilling and menacing as ever but is ably matched by a Daniel Radcliffe who has grown in strength and confidence through the whole series and made Potter his own.

Add to this an ending which actually manages to tie-up loose ends and leave an audience satisfied. JK Rowling does a good job of both leaving the Potter Universe open for future sequels and also ending on a note which means those sequels don’t feel necessary.

Overall, Harry Potter and the Deathly Hallows: Part 2 may be one long, drawn-out finale but it is one full of spectacle, visual mastery and moments which will satisfy. Characters get their time to shine, while the battle to end it all is worth the wait. It is just a shame that some clarity of story is lost along the way.

One thought on “Harry Potter and the Deathly Hallows: Part 2 (2011) Review”