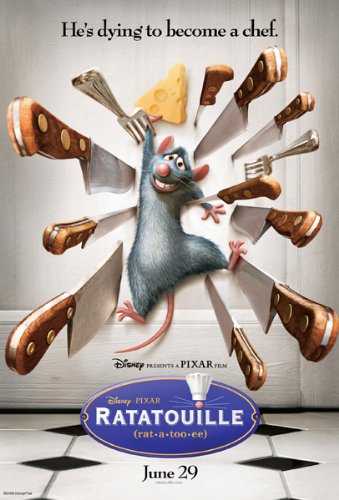 Pixar are fantastic at taking an idea or concept and playing with it. The initial concept of “what if your toys are alive when you can’t see them” was a great one to develop, as was the idea of the monsters in your closet being real and needing your screams. Ratatouille works off a similar Pixar ideas principle, namely “what if a rat was a great cook.”

Rats being the opposite to what anyone would want to see in a kitchen but one particular rat being amazing at cooking is a great starting point but unfortunately for Pixar, it doesn’t go much further than a great initial concept. This isn’t one of Pixar’s great animated movies but instead a movie which never really gets out of third gear and delivers what you’d hope it would.

It is a shame because that initial idea has plenty of potential. It is when the rat, named Remy, begins to work with a human called Linguini that the film begins to stumble. Up to that point, the idea of a rat with standards about his food was a good concept that was being worked well. When the rat is in the kitchen helping useless Linguini cook, the film doesn’t really know what story it wants to tell.

Within this one movie you have an evil chef, paternity scandals, a sub-plot about acceptance and family, a love story and a theme about judgement and food. Multiple strands is not a terrible thing but Ratatouille clearly doesn’t know which it wants to develop so at times it feels like there isn’t an actual coherent story at all.

This isn’t to say that Ratatouille doesn’t have it’s moments. There are times when it is very clever and the typical comedy we have expected from the animated studio comes through at key moments. The voice casting is as solid as ever, particularly Patton Oswalt as Remy, who plays the usually exasperated rat perfectly.

Food critic Anton Ego is also a key character and gets one of the better stories of the movie. Voiced by the legendary Peter O’Toole, the food critic is one of at least two antagonists in the movie but with his sub-plot we get some of the classic Pixar heart which has made previous films so famous.

Ratatouille doesn’t have enough of that though. It is funny but not hilarious. It has a great idea but not a great story. The animation is as solid as ever but by this point that isn’t enough. There is heart in Ratatouille but not enough to make you connect. It just doesn’t feel enough Pixar to be a Pixar movie.

Overall, Ratatouille is a solid animated movie but considering what we have come to expect from Pixar, it doesn’t do enough. A great idea but a muddled story means it doesn’t hit all the Pixar checkpoints that you expect. A rare disappointment.