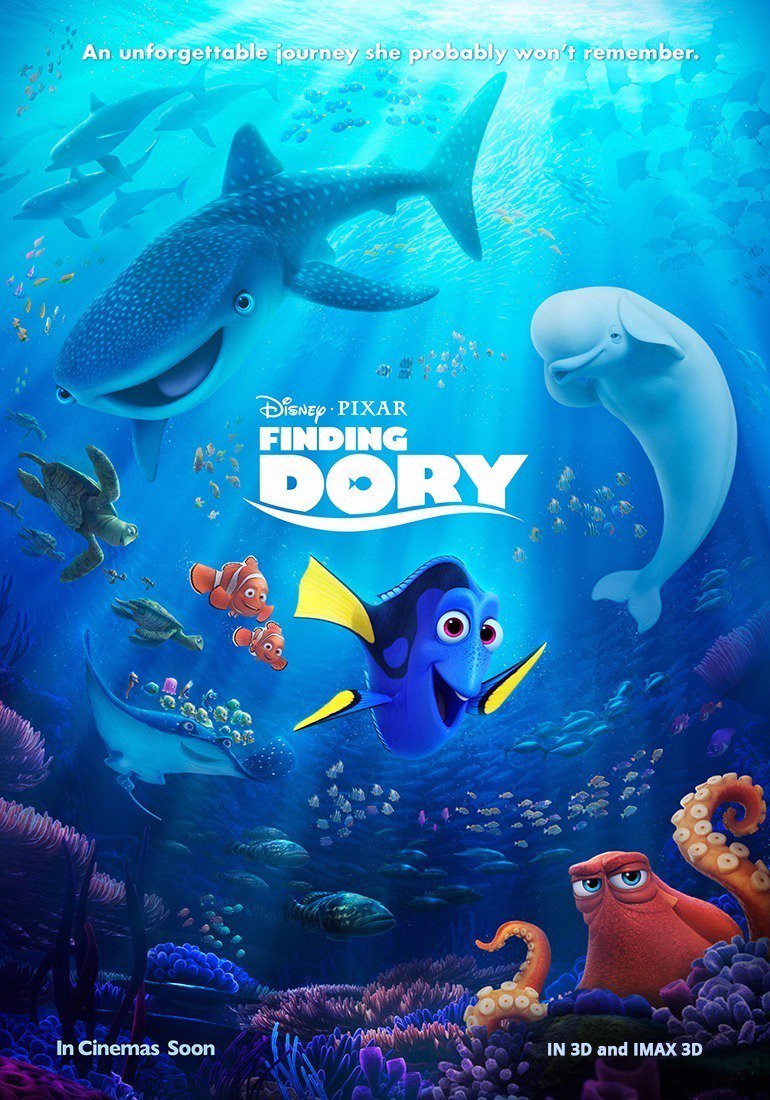 Pixar have a mixed record with sequels. At their best they can develop characters and stories, moving the forward and developing the core concept perfectly (see. Toy Story) however at their worst they feel like cheap cash-grabs and you wonder why Pixar revisited that particular movie at all (Cars).

Finding Nemo was as good a Pixar film as you can get. It also felt like a contained story with little development and very few places to take these characters without repeating what had gone before. Finding Dory is a risky prospect then but one that Pixar treats with enough care that it actually works and there is a lot to like about the movie and what it is trying to do.

For starters, Dory was one of the better characters from the original movies so developing her particular story is a good idea. The opening, like with the original, is a look at Dory’s childhood and just like the original, it has a heartbreaking moment which makes you root so much harder for Dory when she finally decides to try to find the parents she has obviously forgotten.

Placing your focus entirely on a supporting character could have been a risky move but Dory has some strength and appeal. Her memory loss is never too much of an annoyance and the movie finds a way to make it work. Unlike the first one though, her “journey” isn’t a particularly long one and instead she finds herself trapped in a SeaWorld-style marine-park, trying to find her way back to the original exhibit she was held in.

Without the open sea, Finding Dory is required to find the usual range of exotic and colourful characters from the SeaWorld itself. As usual, the characters are great and have a great range of unique and quirky qualities. There is the blind whale played by Kaitlin Olson, partnered with another whale which has lost his song, brought to life by the perfectly cast Ty Burrell. The Modern Family connection continues with Ed O’Neill playing Hank, an Octopus desperate to escape the aquarium.

As you’d expect though, it is Ellen DeGeneres herself that steals the movie and holds her own as the lovable Dory. With her at the centre there is a great heart to the film and you desperately want her to succeed. As with the best of Pixar, it is a movie which has some great heartfelt moments, some very funny comedy and aspects of adventure and daring that a fish shouldn’t be involved in.

It is a shame that considering their place in the first film, Marlin and his son Nemo are relegated to a weak “searching” story of their own. You’d argue that the “Finding” in the title is more metaphorical as there is little searching and the film suffers from the lack of an actual “adventure” like the first. It also lacks danger too, with little of any huge consequence happening to the characters. The singular environment feels like it restricts what gave Finding Nemo some of its original magic.

The film does have a great ending though. The clues and seeds are planted for a resolution that works and just as you were with Finding Nemo, you’ll be left suitably over-joyed with the conclusion.

Overall, Finding Dory is a revisits the much-loved characters in a successful way. The story works, the quest is worthy and the characters as varied but funny as ever. It never really hits the magic of the first but still has enough heart to be considered a success.