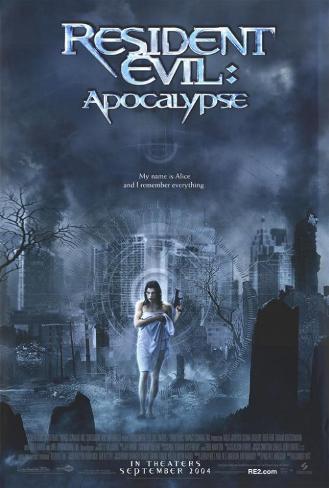 Unlike the first movie which kept it’s ties to the video-game it was based on very loose, Resident Evil Apocalypse at least attempts to make better links and some of which are actually fairly successful. This means that alongside Milla Jovovich’s returning Alice we now have Jill Valentine, played by Sienna Guillory. The movie is set in a zombie infested Raccoon City, the setting of the second game, and features the fan-favourite video-game character Nemesis, making things increasingly difficult for our heroes.

Those heroes are the first positive of this Resident Evil movie. The characters here are a lot more interesting. Jill Valentine is a detective who can hold her own, Oded Fehr plays Carlos Olivera who adds the required muscle while Mike Epps is the wannabe gangster who is out of his depth and offers comic relief. It is unfortunate that the least interesting character in the movie is actually Alice herself who continues to spin-kick and gun-down zombies with little to no regard.

Resident Evil is also more of a zombie movie this time around. The first film suffered when the zombies were actually unleashed but here they have impact, tearing through a city, causing chaos and becoming a general problem for our heroes. This movie feels more like a classic zombie horror too. It takes advantage of some great set-pieces, from one in a church involving the dreaded Lickers from the first film and another involving entering a school (classic horror fodder).

The story is better as well. The heroes have purpose, having to out-run a nuclear-bomb to ensure they save the doctor who started the contagion and get rescued. It doesn’t do anything you haven’t seen hundreds of times before but it does have it’s moments and is successful at keeping you entertained.

This also comes down to the fact that Resident Evil sheds the horror in favour of the action. This is where the franchise comes into it’s own. Milla Jovovich is kick-ass as Alice and seeing her gun-down, run-down and dispatch countless zombies in impressive ways is a great hook for the movie. The showdown between her and the aforementioned Nemesis works well too.

Which is why it is a shame this never feels more than a glossy B-movie. There was a low-rent, low-budget charm to the original which just about worked but here it justifies more and that doesn’t come across. The actors are mainly unknown and act accordingly while the action feels slightly stifled, particularly as it draws to a hurried conclusion.

Clearly seeing another movie on the cards, the ending is a rushed bridge to whatever that film could be. There is a strange bolted-on ending which doesn’t add anything to the story and makes you wonder slightly why you bothered to watch through if this was just going to serve as a clear prequel to something more.

Overall, Resident Evil Apocalypse does feel a better suit to the game that gave it is name but doesn’t capitalise enough on the positives it has. A good story, good characters and some genuine moments of horror make this worth a watch but it never sheds the clear B-movie influence and budget.