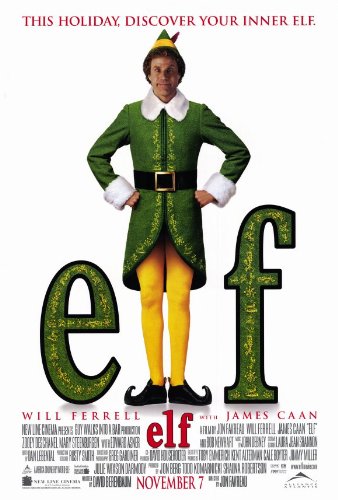 Elf has established itself as a solid modern Christmas classic. This is because it is a fairly unique story (for a Christmas film) that showcases the talents of one of the funniest people in Hollywood. Unfortunately, only one key aspect of the movie is actually that funny, while the rest falls into the usual Christmas fare.

Will Ferrell is the human who is raised as an elf. It is a funny premise and it is great to see the super-sized Ferrell sitting on a small toilet or trying to fit-in amongst the smaller stature of the elves. It plays into Ferrell’s comedic hands perfectly and he shines in this movie, even more so when he enters the human world of New York.

It is when Ferrell is in New York that the movie comes to life. The best part of this is Ferrell’s Buddy trying to adapt to the world that he has no knowledge of. The best fish-out-of-water stories place the protagonist in increasingly awkward situations and Elf is no different. From eating the bubble gum stuck on the street through to a cringe-inducing date proposal, leading through to a very quaint first date, Ferrell shines as the innocent, oblivious but charming Buddy. There is no malice in this movie, no large evil villain to ruin the plans, just a family which Buddy is trying to become a part of.

This is where the perfect piece of casting is introduced. James Caan plays the father that Buddy never knew about. As surprised as his elf son, Caan is a great choice because he embraces the role perfectly. A great straight-man with a menacing persona, Caan is under-cut effectively by Ferrell who inspires a great comedy double act out of the two. It is effective and the best relationship of the movie.

There are other key characters but do very little than supply Ferrell with another opportunity for a funny sketch. Even love interest Jovie, played by Zooey Deschanel, is little more than a singing muse for our hero. She gets a small piece of story in the finale but this is full of generic Christmas action that she is easily over-looked.

Which is the issue with Elf. Once Buddy seems to have adapted to his new surroundings, some attempt at a story tries to emerge and Elf becomes a generic Christmas movie. A sled, Santa, high-flying soaring and unbelieving crowds are no different to many other Christmas movies and some of the Ferrell charm is lost.

Overall, there is a lot to like about Elf. Ferrell is on great form and once he is trying to survive in New York (and getting it wrong) the movie is at it’s best. Unfortunately it tries too hard to fit a story within these sketch style scenes and it starts to become something slightly too generic.