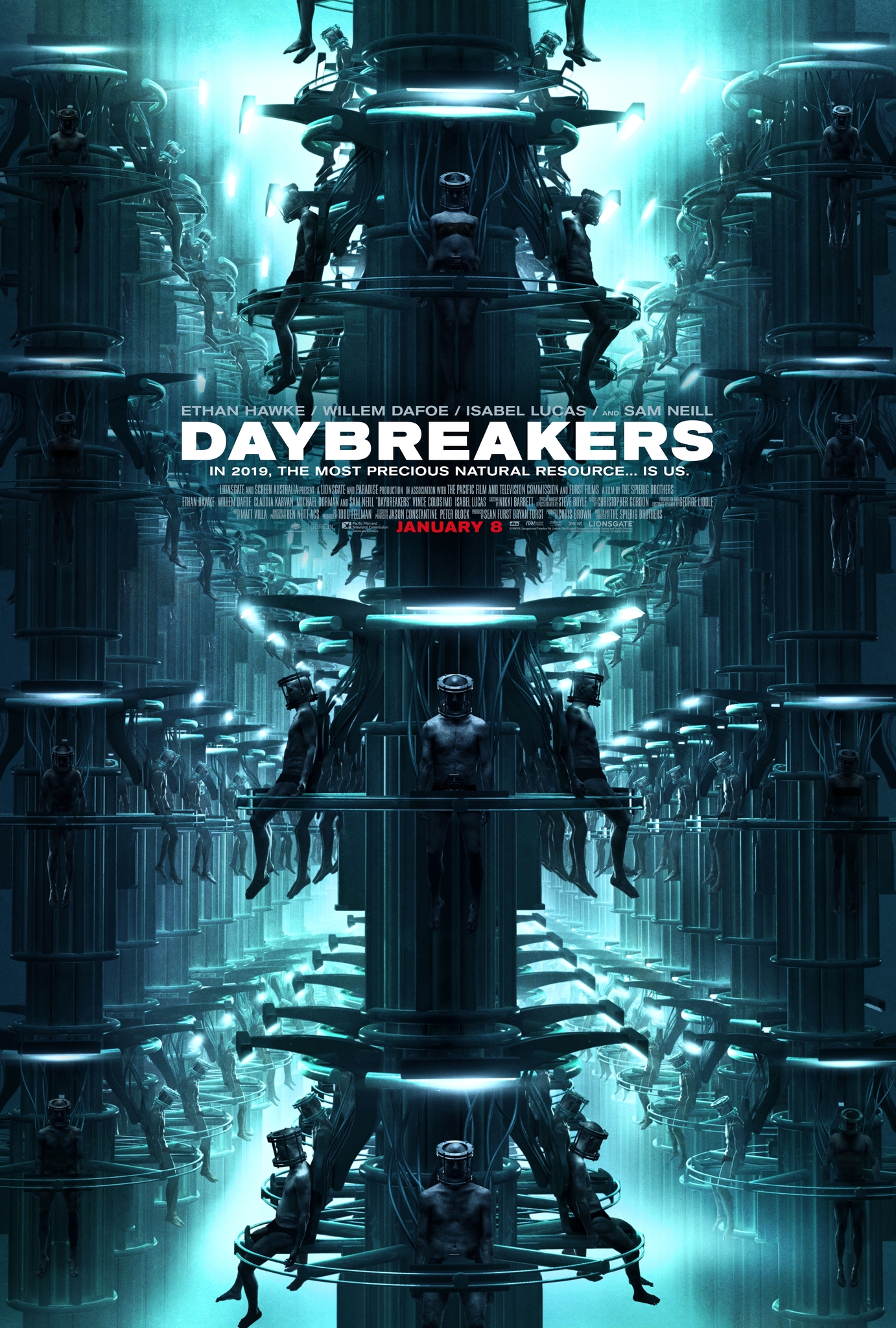 There is a great idea at the core of Daybreakers. The film uses its science-fiction and recent future setting well to create a world which seems tangible but is based around a unique idea: Most of the population are now vampires. America has been over-run by a virus which turns people into vampires and the human population they rely on for sustenance is running low.

It is a very good hook with plenty of potential for many different directions. There is the scientist played Ethan Hawke, who is rejecting the use of human blood and desperately searching for a replacement. He works for a crooked businessman, brought to life by a hammy Sam Neill who is clearly loving every moment and leading a human resistance is a mysterious but always effective Willem Dafoe as “Elvis.” These are just some of the core characters which bring this futuristic but not quite dystopian world to life. To give much more of the story away would spoil key points but the plot involves the fight between vampires and humans, science, the military and some key twists that always engage and keeps Daybreakers interesting.

The film benefits from taking the vampire concept seriously. It doesn’t play it for horror (although those elements do come into play at times) and it doesn’t play too creatively with the “rules” of being a vampire. All the usual tropes are present and correct and the clever design of a world which must accommodate vampires is one of the more engaging hooks. From the cars that are driven to the way their “drinks” are sold, this world is well realised and the film is more believable for it.

The story then weaves its way through this world effectively. It is a thriller, with Hawke’s conflicted scientist at the centre. Hawke holds the action well and demonstrates why he is one of the more accomplished if slightly low-key actors of modern Hollywood. Here he is vulnerable but heroic, particularly in the final act.

The final act, however, is the weakest aspect of the movie. Having set up a great plot, with some fantastic potential, the finale does feel slightly too generic. It plays more like “good guys meets bad guys” and becomes a gore-fest and blood-bath rather than the more intelligent film that has been presented for the first two acts. This doesn’t do enough to spoil what is a great, clever science-fiction movie though.

Overall, Daybreakers takes a well-worn concept such as vampires and offers a fresh way in which to view the fantasy aspect and the world it creates. A great cast delivers a story which engages throughout, even if the finale lets it down slightly.