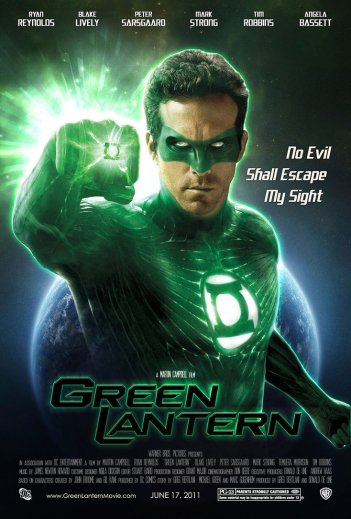 DC made Green Lantern about six years too late. Rather than make a superhero film at the beginning of the superhero craze, alongside Raimi’s Spiderman, Fantastic Four and even Iron Man, they decided to throw their contribution amongst the others when we were at the height of the genre. The problem with doing this is that if you are going to make a film that belongs to genre that is already highly saturated, you have to do it with something original… and Green Lantern isn’t original!

It could have been though. DC have Superman and Batman and with those two characters they are pretty much guaranteed box office success, even if the film is below par (though if either can do Avengers numbers is yet to be seen) but with Green Lantern they could have brought something to the table that was brand new, suitably unknown and actually a rival for what Marvel were doing. Instead they create a standard, average, “seen it all before” origin film.

It could have been so different. Green Lantern is a character which literally has limitless possibilities. His imagination is the only thing that holds him back so whatever he thinks about, he can use. Imagine the film they could have made and to be fair, this has its moments. The battle in the Green Lantern corps. is a glimpse of how cool it could be and when Hal Jordan first uses his powers properly, to save a crashing helicopter, he does use the “whatever I think of comes to life” to decent effect but it just feels tame.

The whole film feels like its going through the motions and has the “set-up for the sequel” syndrome that drives me mad. It’s like they referred to the origin story checklist – Cocky, unworthy hero (check), Damsel in distress (check), Hero born out of “against-the-odds” situation (check), Wasted the biggest villain this hero has in the first film (check), Set up potentially decent villain for the non-existent sequel (check). This formula would have guaranteed you success six or seven years ago but we have literally seen it about four or five times, and that’s Marvel alone.

It is a real shame because I think the ingredients are all here for a decent franchise. Ryan Reynolds is great as Hal Jordon. He has the cocky but likable character down to a tee while still being able to do heroic and serious when the situation calls for it. He carries this film effortlessly. There are some great support characters that we get a brief couple of scenes with and the potential within this universe is limitless. Mark Strong is fantastic in this and the role he would inevitably play in the second would make it even better.

There are too many films that feel like a pilot for a television show. A glimpse at a characters potential and in some cases a “bare with us, we have loads of stuff to show you” but rather than just show us what can be done with these characters, we end up with a film that nobody really got excited about so consequently will fall to the wayside with the other “almost franchises.” It annoys me because DC have two weapons in their arsenal that Marvel will never be able to compete with in Superman and Batman, so they should use their heroes like Green Lantern, Wonder Woman, Flash, Martian Manhunter and Green Arrow, to try something different with the superhero genre.

DC successfully relaunched all their heroes in the comics with 52 so they have some sort of decent creative power and if they want to compete with Marvel at all, they are going to have to bring something different to the table in the films too. In my opinion, like I’ve already said before, that has got to be a Justice League film. No origins, no single films building up to one, just go straight into a JLA film, with Ryan Reynolds as Green Lantern and without Superman and Batman.

Overall, Green Lantern was a huge disappointment. DC have a lot of decent superheroes that they can really do a lot with but if they making basic, average origin films then we will never get a franchise to rival Marvel’s outside of Batman and (hopefully) Superman. This film has a lot of potential and there are some great moments but its lost amongst ingredients we’ve seen before, lots of times!