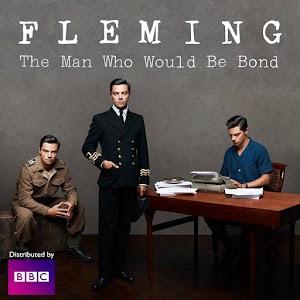 I’m not certain what they hoped to achieve with Fleming. It is based on the life of James Bond creator Ian Fleming, a man who was a Naval Officer, collecting intelligence against the Germans during World War 2. He wasn’t ever a fully active spy, didn’t go abroad and kill Nazis and didn’t actively see action, at least not in the way portrayed in this tv series.

In fact, the series seems to want you to believe that Fleming was James Bond, but during World War 2 rather than the Cold War. Without being able to use James Bond for themselves, the people behind Fleming have decided to make the author the heroic spy instead. It means what we get is a bio-series that isn’t truthful but also restricted by the loose threads that hang Fleming’s life together.

Making it the life of Fleming means that if you have a passing interest in James Bond, you will probably tune in. It’s more of a marketing device than a story-telling one and it doesn’t help the story. In fact, it restricts it because the show rarely lets loose the actual “spy” they want Fleming to be.

One episode gives the hero something to do and it’s the best of the mini-series. He gets to go behind enemy lines, be an actual spy and see some action. It’s a series that I would have gladly watched because the more bureaucratic side of being a spy isn’t actually that interesting.

The secondary story is one about the turbulent relationship between Fleming and future wife Ann O’Neill. Again, this feels embellished, although I don’t know enough about the story to truthfully comment. It’s one that detracts from the more action-focused episodes and is a relationship that doesn’t seem to make much sense, although the chemistry between the leads is fantastic.

In fact, the casting is one of the series strengths. Dominic Cooper is still under-the-radar as an actor, his biggest role being as Howard Stark in the Marvel Universe but here he demonstrates that he could hold his own in an action series or even, at a push, as Bond himself. Lara Pulver has already demonstrated how good an actress she is, particularly in the BBC version of Sherlock, but here she plays the seductive O’Neill as effective as she does The Woman.

It’s just a shame that the series has such a muddled identity. There are some nice hints at the connection to Bond but the fact that Cooper’s character is Fleming actually holds the show back, pigeon-holing the story into a life that may not have been as interesting as this show wanted it to be.

Overall, Fleming had potential to be a great spy series, aping James Bond but offering a different background, but by trying to recreate Fleming’s life, it restricts itself. Instead of an action orientated show, it becomes a series about a toxic-relationship and bureacratic Naval spy.

Best Episode – Episode 4: The only episode with some proper, spy style action.

Should there be another season? – I don’t think there is supposed to be but even it was designed to continue, it couldn’t do in this format.