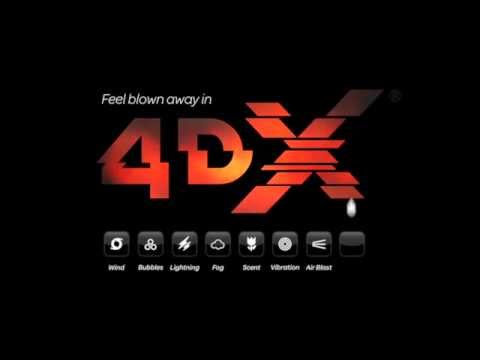 My local Cineworld cinema has a gimmick called D-Box. I call it a gimmick because it adds very little to the movie viewing experience other than a more expensive ticket. Your chair vibrates in time with the action. That is it! Many people enjoy it but I think I’d find it very tiring and nothing more than a very novel idea.

Cineworld are taking their D-Box idea one step further though and adding 4DX. The advert boasts an immersive cinema experience that includes the usual 3D and chair motion but also adds a wind machine, a smoke machine (fog), spraying water, lightening, bubbles (?) and even scent. As the characters smell poo, you too can smell poo!

This seems like a bad idea. They’re advertising this experience with movies like Jurassic World, The Martian and of course Star Wars: The Force Awakens. As Han Solo gets wet, so do you. As Chewbacca gets blown by wind, you can too. When Leia is attacked by bubbles, there will be bubbles! This feels like it is beyond immersive and novel and now in the territory of distracting.

At a time when 3D is still more of an expensive gimmick than a necessity and D-Box is an optional, nauseating annoyance, 4DX seems to go one step too far. The cinema is supposed to be when a director and all others involved in a film can showcase their vision in a pitch-black, usually silent environment. What 4D does is not immerse you in the experience but actually remove from it. As a character is struggling to survive while drowning, you’ll be too busy screaming and squirming as you’re hit with water or as a desperate man confesses his love on a rubbish tip, you’ll be trying to stop yourself gagging from the smell.

Like 3D, this also feels like it will be an added feature. I can’t imagine Steven Spielberg, Christopher Nolan or Martin Scorcese directing a scene but adding the note “shoot bubbles at the audience now.” This means it will be down to some cinema employee who will be over-using the technology to justify the high price.

That is the final complaint. The price will of course increase. D-Box in 3D is already £12.70 per ticket so you can imagine 4DX running at a much more inflated cost, maybe closer to £20 a ticket. That will be pretty steep, particularly when the novelty of the 4D wears off after twenty minutes and you just want to watch the movie as the creators intended.

4DX is not a bad idea but should be used for theme parks and ride-style experiences. It shouldn’t be used over a 90 minute movie, where I leave the cinema smelling badly, soaked through and coughing from a fog machine.

Overall, you can call it a money-making scheme or another attempt to increase the immersive cinema experience but 4DX is a poor idea. It will take away from the movie, distracting rather heightening and adding nothing more than a larger gap in your funds. Stay clear, most people will eventually.